We are leaving what has arguably been the best year for offshore wind so far with a hope that the one ahead of us will be at least as eventful and successful as 2016 was, if not better.

First, there was Borssele I & II in the Netherlands, where DONG Energy beat the competition by submitting the lowest bid with an average of 7.27 Eurocents per kilowatt hour. Then, Vattenfall won the Danish nearshore wind tender for Vesterhav Syd and Vesterhav Nord sites with a bid price of 6 Eurocents per kWh (DKK 0.475/kWh).

Two months later, Vattenfall made headlines again by winning the Kriegers Flak tender in Denmark with an offered price of 5 Eurocents per kWh (EUR 49.9 /MWh).

Finally, the second tender in the Netherlands for Borssele III & IV sites saw another record price of 5.45 Eurocents, offered by the winning consortium between Eneco, Van Oord, Mitsubishi Corporation and oil & gas giant Shell. This marked Shell’s second bid at the Dutch tenders, since the company participated in the first one as well.

Shortly after winning the rights to build the Borssele III & IV offshore wind farms, Shell announced it is investing in Kite Power Systems, a start-up developing high-altitude wind power generation technology, together with E.ON and Schlumberger.

A couple of days later, the company informed it has entered into an offtake agreement for 100% of the power generated from the Egmond aan Zee offshore wind farm, in which it holds a 50% stake.

In line with oil & gas companies tapping more and more into the offshore wind market, some half a year ago, the Crown Estate granted a lease to Statoil that enabled the company to start the construction of its 30MW Hywind Scotland project, which is set to be the world’s largest floating wind farm.

In December, Statoil marked another record as it secured lease rights for the development of an offshore wind farm off the coast of the US state of New York by offering USD 42.5 million (approx. EUR 41 million) at the US government’s auction.

In 2016, offshore wind gained momentum out of Europe, which is still leading with the development and installation of this technology.

Breaking news on the results of the latest lease sale in the US came just after the country’s first offshore wind farm, set up off Block Island, went into commercial operation.

Taiwan is becoming an attractive market for developers, both domestic and foreign, as Taipower set ambitious plans and DONG Energy revealed its intention to build four wind farms.

Furthermore, Japan is gearing up for a boom in offshore wind projects with New Energy and Industrial Technology Development Organisation (NEDO) supporting the development of two offshore wind farms with a combined capacity of 270MW, the city of Kitakyushu auctioning 2,687 hectares of water area for nearshore wind farms, and Hitachi Zosen and Ideol working on their 2-turbine floating wind project.

And it is worth to mention that Russia got onto the offshore wind map with the recent agreement between Chinese company Sinomec and the government of the Russian republic of Karelia, under which a 60MW offshore wind farm will be installed off Kemsky District and the construction is set to start as early as 2017.

Not only did offshore wind grew in terms of geography, but also in size of the components and the wind farms themselves.

Aside from the abovementioned Statoil’s Hywind Scotland, the world’s largest floating wind farm, the offshore wind industry saw more than one “world’s largest” during these past twelve months.

In early 2016, DONG Energy reached final investment decision on its 1.2GW Hornsea Project One, which will become the world’s largest offshore wind farm, once built.

Burbo Bank Extension became the first home for the world’s most powerful wind turbine currently on the market.

Our old and worn-out spinning friends have already started leaving, after setting the offshore wind stage for what we are witnessing now.

At the beginning of the year, Vattenfall dismantled five wind turbines with a total capacity of 10 megawatt (MW) which made up the Yttre Stengrund wind farm in Kalmar Sound, Sweden.

A little after that, DONG Energy informed it is preparing to decommission Vindeby, the world’s first offshore wind farm, located in Denmark.

Furthermore, Nuon, part of Vattenfall, decommissioned four offshore wind turbines that made up the Lely offshore wind farm in the Netherlands.

The 10MW Beatrice Demonstration wind farm in the UK and German 5MW Hooksiel projects were also dismantled this year.

Not to worry much about the offshore wind farms that disappeared from the horizon, the ongoing projects will make sure there are more wind turbines installed at sea over the following twelve months.

The 350MW Wikinger wind farm in German part of the Baltic Sea is scheduled to be operational in 2017, same as its 402MW compatriot Veja Mate.

When it comes to construction, offshore works for German 385MW Arkona offshore wind project, as well as UK 41.5MW Blyth Demonstrator and 588MW Beatrice are expected to start next year.

Also, the 714MW East Anglia ONE in the UK is set to enter construction phase in 2017.

This article covers only a small portion of milestones reached in 2016 (and those set to be reached in 2017), so it may not be completely wrong to conclude that we witnessed an amazing year for offshore wind. 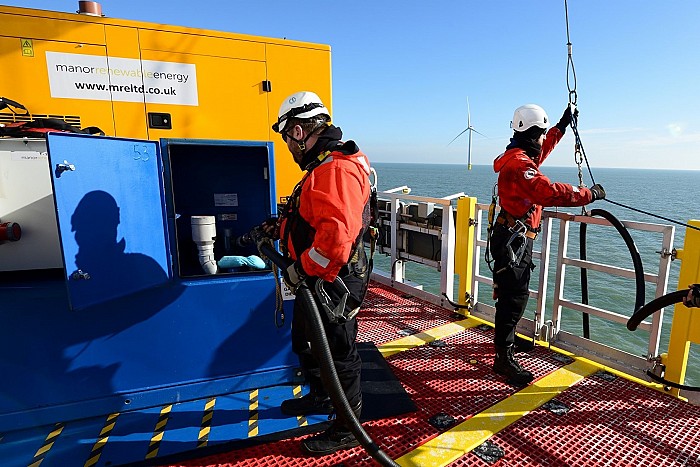