Offshore construction of the Veja Mate offshore wind farm has started with Seajacks Scylla having installed the heaviest monopile produced so far at the project site, according to DGI Doedijns, which provided hydraulic and software equipment for the pile-gripper used at the project.

The Scylla, deemed the world’s largest and most advanced wind farm installation vessel, arrived at the site on Friday, 1 April, and installed the first monopile during the weekend.

The 1,302.5-tonne monopile, which is 82.2 metres long and has a diameter of 7.8 metres, was manufactured by EEW Special Pipe Constructions GmbH in Rostock.

Scylla will now continue the installation of the remaining 66 monopiles at the construction site, located 95 kilometers northwest from the island of Borkum in the German North Sea. Another Seajacks’ vessel – Seajacks Zaratan, will install transition pieces. “This set up of installing monopiles and TPs from separate installation jack ups was very successful on Blackstone’s 288MW Meerwind project and I am sure it will be the same here,” Seajacks CEO Blair Ainslie explained in November 2015.

Veja Mate will feature 67 Siemens 6MW turbines, which will be installed by Fred. Olsen Windcarrier, starting from early 2017. 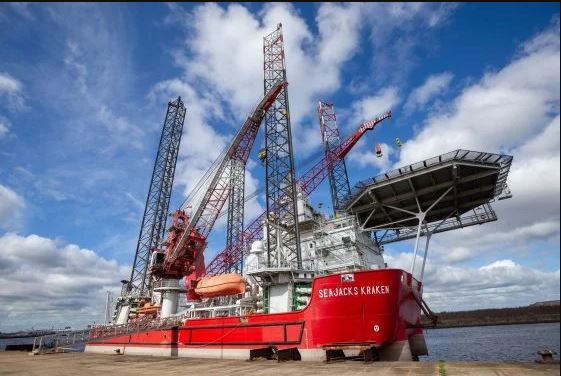