The hull is complete, the steelwork concluded, the building of the deckhouse has begun – in the dock of Sietas shipyard the first jack-up vessel for offshore wind farms developed and constructed in Germany is currently taking shape.

Construction started in April 2012; the handover of the ship to the client, the renowned Dutch marine engineering company Van Oord, is planned for July of this year. For further work on the final assembly, the jack-up vessel needs to be floating in the dock harbour of the Sietas shipyard. For this reason, it has now been undocked with an elaborate change in position, and its former construction platform has been removed from the dock harbour.

Sietas insolvency administrator Berthold Brinkmann said: “The jack-up vessel demonstrates the outstanding performance of the Sietas shipyard and its team. During the insolvency proceedings, a highly complex special purpose ship for demanding offshore wind farms is taking shape as a result of the contract between Van Oord and the insolvency administrator. Sietas also developed this ship itself. This is unique for a German shipyard and underscores the globally competitive know-how of the engineering, construction and work output that this shipyard offers.”

Undocking from the dock harbour for final assembly

Up to now the jack-up vessel lay on a construction platform in the dock harbour of the Sietas shipyard. Dr Ludwig Reichert, authorised agent of the insolvency administrator, explained: “The ship’s hull is now complete, the steel work concluded and the building of the deckhouse has begun. With this, the load-bearing capacity of the construction platform had been reached with around 12,500 tons. For the concluding final assembly the 140-metre-long ship must now float in the water of the dock harbour of the shipyard.”

For this purpose an elaborate switch in the position of the ship was necessary through the Este dam structure bordering the dock harbour to the rivers Este and Elbe. First the water tanks of the construction platform were filled so that the platform could be lowered. With the incoming tide the ship then started floating. In the next step it was towed by tugs out of the dock pit and hauled through the Este dam structure. This required precision work, because at 38 m the jack-up vessel is barely narrower than the gate of the dam structure with 40 m. Afterwards, using a tow up the Elbe, it was securely parked at a quay in the Hamburg harbour. In the next step the water was pumped out of the tanks of the construction platform, so that the platform also floated and could be towed out of the dock harbour. Finally, the jack-up vessel was then again towed through the Este dam structure into the dock harbour and now lies afloat in the water for final equipping and its initial commissioning at the Sietas shipyard.

Status of construction and next steps to be undertaken

The Sietas team is currently working on the special purpose ship in a three-shift system. Around 400 workers were involved in the especially intensive construction phase. “In just six weeks we built the afterbody and the forebody out of nine blocks – a top achievement by the team in such a short period of time,” explained Oliver Arnold, Sietas shipyard project manager for the jack-up vessel. The four heavy rudder trunk blocks, in which the stilts are held, with which the ship can later raise itself out of the water while working at sea, were also produced at the shipyard. “Our workers were classified for the construction of the jack-up vessel for offshore structures and thus are among the few in Germany who can work with offshore steel. With the construction of the ship we are showing that we master the right mixture of industrial production skills such as assembly, special technical skills and highly technological engineering,” said Martin Stolzenberger, head of final assembly and commissioning of the ship at the Sietas shipyard.

In the coming weeks, among other things, the deckhouse bridge from which the ship is controlled will be further set up, the expanded leg guides for the stilts will be installed and the offshore crane that can lift 900 tons will be erected with its foundation, pillars and booms. After this work has been concluded, the ship will leave the shipyard at the end of June for its first trial voyage. Construction at the Sietas shipyard is then concluded. The ship is unlikely to receive its four stilts, with their length of 84 m each and corresponding “shoes”, until after the first trial voyage at sea outside the shipyard due to the special dimensions of these components.

The Sietas shipyard also developed the jack-up vessel in cooperation with the client, Dutch marine engineering company Van Oord. The crane was built at the former Sietas subsidiary Neuenfelder Maschinenfabrik (NMF), now belonging to the TTS Group. The construction of the jack-up vessel involves close cooperation between the Sietas shipyard and Van Oord; a team of about 20 engineers, experts and project managers from the client firm, which specialises in complex offshore projects, is on-site during the formation phase at the Sietas shipyard. 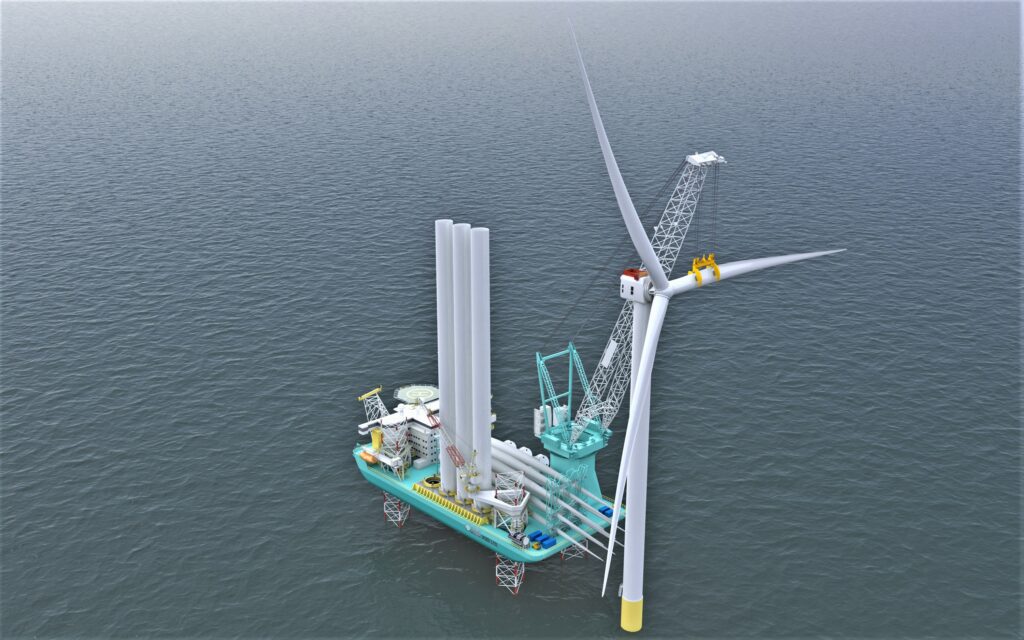