DONG Energy’s Race Bank recently accommodated trials of a new product aiming to eradicate the problem of seabird droppings, or guano, that is costing the global wind industry millions of pounds a year in delays and clean-ups.

“Scaretech” was trialled for three weeks on the Race Bank wind farm off the UK North-East coast, and during that time no new guano was recorded on the treated areas.

The product is based on a traditional scarecrow concept, used successfully for centuries to keep birds off crops, and adapted for the harsh offshore environment of a wind farm or oil platform.

Designed to look like an offshore wind worker in full protective clothing, Scaretech is manufactured from steel, flexible foam and PVC and powered by solar panels. It is fixed to the offshore structure so it can operate in extreme weather conditions. As well as having flexibility to simulate a living person, Scaretech emits sporadic and sensored loud noises and high intensity strobe lights which deter seabirds from landing on the structure.

Wind worker Terry was heading home on a vessel with his team when someone noticed a familiar high visibility PPE colour on the now distant offshore wind turbine they had been working on. Thinking someone had been left behind, the vessel returned to the wind turbine to find it was a forgotten high-vis protective jacket and not a man.

The area around the abandoned jacket was the only place seagulls were not landing within the proximity.

After discussing the phenomenon with colleague Alison Isbister, the idea for Scaretech was born. Fellow-engineer Patrick Armstrong designed the final concept with entrepreneur Paul Stonebanks providing funding and business advice to bring the idea to life.

Following its successful pilot with DONG Energy, Scaretech will now be rolled out to the global offshore market.

Scaretech Global’s marketing and sales director, Alison Isbister, said: “It’s a really simple concept, based on hundreds of years-worth of evidence showing scarecrows as an effective bird deterrent. Scaretech works beyond everyone’s expectations and we now plan to launch it to the global wind industry, as well as providing a 24-hour field cleaning and management service.”

Richard Appleby, health and safety adviser for DONG Energy said: “Guano is a huge problem for wind companies – particularly during construction phase as it can cause unacceptable delays on projects and significantly ramp up costs. Health and safety is an absolute priority to Dong Energy so this product provides a solution we’ve been searching for.”

“I was present when the Scaretech system was originally installed and the results of the trial were frankly astonishing,” Appleby said. 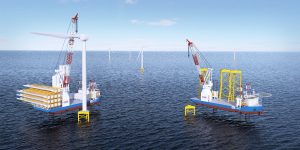