The vessel arrived last month at DEME offshore base near Vlissingen in the Netherlands after sailing out of Bremerhaven, Germany.

Orion is equipped with Liebherr’s Heavy Lift Crane 295000 which has a maximum capacity of 5,000 tonnes and a maximum lifting height of 175 metres.

With a total installed power of 44,180 kW, the 216.5-metre long vessel has a large unobstructed deck and a deadweight that has been maximised so it can handle the heaviest components, DEME pointed out.

“This vessel heralds a new era in the offshore energy industry – one which will be dominated by multi megawatt turbines, jackets and components. The combination of unique technology, load capacity and superior lifting heights will enable ‘Orion’ to play an important role in helping the industry successfully navigate the energy transition,” said Luc Vandenbulcke, CEO of the DEME Group.

Orion is also equipped with an integrated Motion Compensated Pile Gripper (MCPG), which has been designed by DEME’s and Huisman’s engineers.

Coupled with the vessel’s DP3 capability, the MCPG allows the monopiles to remain vertical and stable during installation in the seabed, despite waves and motions of the vessel, and without the use of mooring anchors.

“Combining these engineering technologies and ability to transport the new giant turbines, jackets and components in a single shipment, ‘Orion’ will speed up installation times dramatically, making the vessel an extremely cost-effective solution for wind farm developers,” the company commented.

Another environmental innovation on the Orion is a waste heat recovery system that converts heat from the exhaust gases to electrical energy. The evaporation of LNG also cools the accommodation with a cold recovery system.

At the beginning of last year, Parkwind awarded DEME Offshore with an EPCI contract for the foundations at the Arcadis Ost 1 offshore wind farm in the German Baltic Sea, with DEME saying the company would deploy Orion for the task.

This will be followed by a decommissioning project in the UK. The vessel will also be deployed for the installation of 176 foundations at the 2.6 GW Coastal Virginia offshore wind farm in the United States. 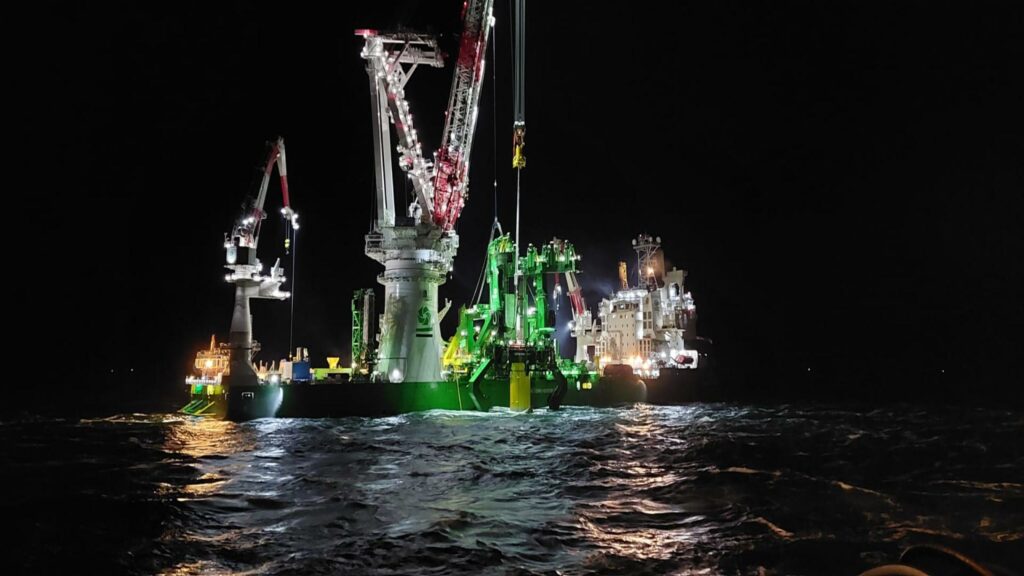