Rhode Island’s Port of Davisville and the South Quay Marine Terminal in the City of East Providence will receive USD 60 million and USD 35 million, respectively, for infrastructure upgrades to support offshore wind activities on the US east coast.

At the beginning of this year, State Governor Dan McKee announced that his FY2023 budget and American Rescue Plan Act (ARPA) spending plan would propose more than USD 150 million to fund a series of proposals to combat climate change, including the USD 95 million for port upgrades related to offshore wind.

The USD 60 million investment to improve infrastructure at the Port of Davisville will power construction of the port’s Terminal 5 Pier and completion of required dredging, preparation of about 34 acres to accommodate additional cargo laydown, and reconstruction and hardening of the existing surface of Pier 1.

“Together, these investments will accommodate the existing finished automobile importing and processing businesses that call the facility home, while expanding capacity specifically for the offshore wind developers”, the Governor’s office said in a press release in January.

According to Quonset Development Corporation, which operates the Port of Davisville, the port hosts one of the Top 10 automobile importers in North America and the upgrades to accommodate activities in the offshore wind sector will be enable the port to support multiple gigawatts of offshore wind projects proposed from Cape Cod to New Jersey.

Backed by USD 35 million from the State, the City of East Providence’s South Quay Marine Terminal will undergo improvements which will create a large, integrated, and centralised hub of intermodal shipping designed to support the offshore wind industry.

State funding will support phase one of the project, which includes finishing design activities and developing the waterfront portion of the terminal into a robust marine-industrial facility, according to Governor McKee’s office.

According to information available online, the South Quay Marine Terminal, located in proximity of the Port of Providence, was built to serve as a port facility, however; the site was dormant for decades.

Rhode Island is home to the first US offshore wind farm, the Block Island Wind Farm, developed and built by Deepwater Wind, which was later taken over by Ørsted. The 30 MW, 5-turbine project began commercial operations in December 2016 and generates enough energy to power 17,000 homes.

The US East Coast is set to become home to multiple offshore wind farms by the end of the decade, until when the Biden-Harris Administration aims to have 30 GW of offshore wind installed in federal waters.

Most recently, in the race to catch up with the new national target, the US held a record-breaking lease sale for offshore wind in waters off New York and New Jersey. 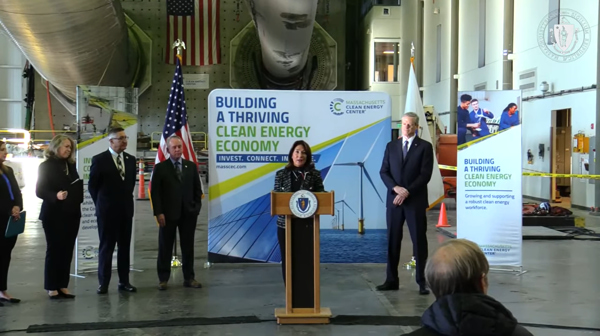