OSP1, the third and final offshore transformer module (OTM) that will be installed at the Moray East offshore wind farm, is ready to leave Belgium this weekend (29 – 30 August).

The OTMs, for which Siemens Energy secured a contract in 2018, were fabricated by Smulders and ENGIE Solutions in Hoboken, Belgium.

“This milestone – three sail-aways without any snags – reached in a period dealing with a lot of COVID restrictions, has been achieved not only due to the very good co-operation between Siemens Energy and Smulders – ENGIE Solutions on all levels, but also due to the fact the structural and electrical works could be executed in parallel for the major part of the construction period”, said Bart Van Rooy, Smulders’ Project Manager.

According to information from the project’s last Notice to Mariners, the jacket foundation for OSP1 was not installed by the time the notice was issued on 24 August.

The first OTM to be installed at the Moray East site was OSP3. The jacket foundation for OSP3 was put in place on 22 July, while the topside was installed around the same time the jacket for OSP2 was installed, which was on 10 August.

OSP2 was the first to have been shipped out from Belgium, on 30 June.

DEME, the EPCI contractor for Moray East’s turbine foundations and the three offshore substation foundations, is also in charge of the transport and installation of the OTM platforms.

The OTMs, which will be linked together to cover Moray East’s rated capacity of 950 MW, will transform the output of the wind turbines from 66 kV to the transmission voltage of 220 kV and transmit the electricity to the grid on land. 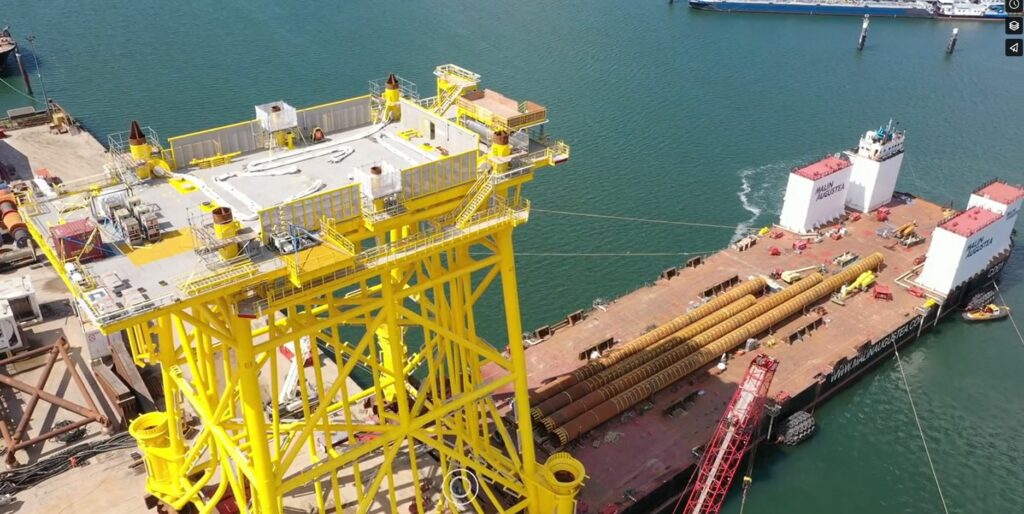