Based on the ULSTEIN SX195 design, Windea Jules Verne is 93.4 metres long, has a beam of 18 metres, and can accommodate up to 120 people.

The vessel, powered by a diesel-electric hybrid system, is equipped with a tower holding a personnel and equipment elevator, and a heave compensated gangway for transfer to offshore wind turbines. The SOV can move in reverse, with the stern first, when operating infield. As an add-on, the vessel will use a daughter craft to further increase the service capacity, according to Ulstein.

GE Renewable Energy contracted Bernhard Schulte to provide an SOV for the 396 MW Merkur project in July 2018, after which the German vessel owner and operator placed an order with Ulstein.

Ulstein Verft began working on the SOV in September 2019 and completed final tests and sea trials at the shipyard in Norway this spring.

In March, the vessel was named Windea Jules Verne, after one of the world’s most popular adventure writers, who was born in Nantes, France, where GE’s Offshore Wind business is located.

At the Merkur offshore wind farm, the Windea Jules Verne will support operations and maintenance (O&M) of the 66 GE Haliade 150-6 MW turbines. 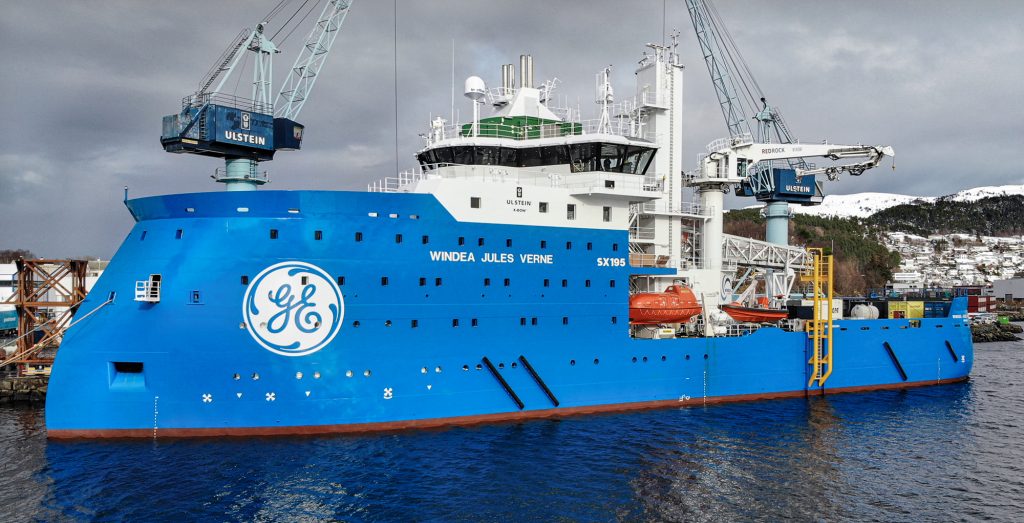