During the Q-meeting of Van Oord and Siemens Gamesa, the audience of 240 wind energy professionals awarded Seaqualize with the public prize. The prize of the professional jury went to MO4. 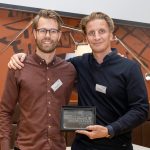 MO4 has developed a software that is said to forecast workability of vessels in offshore operations with much more accuracy than is currently possible, by computing the influence of waves, wind, and current on vessels. This innovation is said not only to make it safer to operate at sea, but it is also said to make the assessment of workability a lot more accurate. The innovation seems to be financially solid thanks to a clear revenue model, the jury has found. According to Jelte Kymmell, MO4’s Managing Director, smarter calculations can considerably lower the chagrin of many installation companies because they can operate their expensive vessels more often. 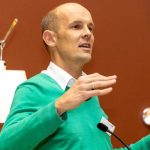 600 mT and up, said to have an unprecedented precision, enabling floating installation or (parts of) offshore wind turbines. A credible working pilot system has been developed that can form the basis for a “floating” installation of wind turbines or parts thereof. This could potentially make a further contribution to the cost price reduction in offshore wind. The system uses 95% passive energy, needing only 30kW for a 600-tonne load, comparable to the capacity of 15 kettles.

Amphibious Energy was also in contention for one of the prizes with its EnergyPod, a transportable, autonomous energy container. This all in one, plug and play package of wind, solar and battery storage is designed to replace diesel generator sets on the monopile transition pieces during installation.