According to EnBW, the first Siemens Gamesa 7MW turbine was put in place on Friday, 5 April, at the offshore site some 95km north of Borkum and 100km northwest of Helgoland. 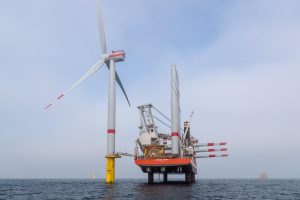 The 132m long vessel collected the components of the first four turbines in Esbjerg and departed from the port in the middle of last week. The trip to the offshore site took twelve hours, EnBW said.

Brave Tern’s sister vessel Blue Tern will also be supporting the installation works over the next few days, the company added.

The commissioning of all of the project’s 71 turbines, as well as 16 from the neighboring Albatros offshore wind project, is expected to take place by the end of the year.

NOTE: The article has been updated to state that the installation took place on 5 March.