Under the direction of Seaway Heavy Lifting, one of the world’s largest converter platforms has been installed off Sylt, an East Frisian Island.

SylWin alpha platform, built by Siemens, is so large and heavy that the ingenious “float-over method” has been used to lift it from a pontoon onto the already installed jacket base. This approach has been used successfully in the Gulf of Mexico and in the Far East, but this is the first time that a platform as large as SylWin alpha was installed using this method in the North Sea.

Siemens commissioned Seaway Heavy Lifting to perform the unusual operation, with the assistance of maritime service providers Dockwise and Mammoet. The 14,000Mt SylWin alpha platform was transported on a pontoon, which was positioned in between the jacket legs. The platform was installed onto the legs of the jacket by ballasting the pontoon. Dockwise was responsible for this phase.

Mammoet will then use jacks to lift the platform into its final position on the jacket.

The 83-metre long, 56-metre wide and 26-metre high SylWin alpha platform is the largest of its type. Earlier this year, Seaway Heavy Lifting used its crane vessel Oleg Strashnov to install the jacket. In spite of the Oleg Strashnov being considered one of the world’s ‘strongest’ crane vessels, it is not strong enough to lift the SylWin alpha jacket.

Therefore, the decision was taken to add additional buoyancy in the form of buoyancy tanks and to ballast the pontoon on site. This complicated operation has been preceded by more than a year of preparatory work.

The SylWin alpha converter platform will serve as a “power socket” for the DanTysk, Sandbank and Butendiek wind farms, which together comprise 240 wind turbines and represent a generating capacity of 864 megawatt. Grid manager TenneT, Siemens’ customer, is responsible for the connection of the wind farms to the German high voltage grid.

A large number of Dutch companies are involved in the installation of SylWin alpha, led by the main contractor Seaway Heavy Lifting. In the summer of 2013, in collaboration with Marin, the research institute, extensive simulations of the most complex aspects of the installation were made. Mammoet was closely involved in the transportation of the jacket. Equipment supplied by Cape Holland, IHC Merwede and Franklin Offshore Europe was used during the installation of the jacket by Seaway’s crane vessel Oleg Strashnov. Boskalis supplied the majority of the required pontoons and tugboats; Dockwise is responsible for the float-over operation. 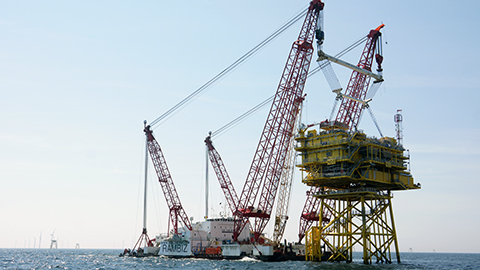