The port of Emden is one of the largest ports in the federal state of Niedersachsen in Germany and located furthest west on the German coast, strategically near the deep waters of the North Sea and easily accessed by road and rail. Its main activities are the import and export of automobiles, forest products and of course the wind energy industry. For the latter it builds on a long history in the onshore wind sector and with plenty of offshore wind farms planned in its proximity it is looking forward to a promising future.

Offshore WIND spoke to Andreas Bullwinkel, Managing Director of Seaports of Niedersachsen GmbH, with regards to the role of the port in the offshore wind industry. Mr Bullwinkel tells, “The port of Emden has a strong role in both on and offshore wind energy, you can not talk about the one without mentioning the other.” The port’s involvement in the wind industry goes back to when onshore wind turbine manufacturer Enercon decided to use the port for handling their large components.

As a result other companies such as transportation handling companies EVAG mbH, EPAS Beteiligungsgesellschaft and ANKER Schiffahrts GmbH focused on this sector also. The port has therefore built up the necessary experience and knowledge in handling large components from an early stage, so the next step, handling the even larger components, was logical.

In 2005 BARD choose the port to set up their production facility to produce the nacelles, hubs and rotor blades for their first offshore wind farm BARD Offshore 1. Steel manufacturer SIAG Nordseewerke GmbH followed a couple of years later. Mr Bullwinkel: “This was really a big success for the port as is it meant it was no longer just offering logistic services but would then become a port with production facilities, this really helped to develop the wind energy sector.” Today the port hosts a range of companies that are serving the offshore wind industry in production, services and handling. It also has a university located in the port area where research is done on improvements and new talents can be trained.

The port has an inner and outer port with 7 fixed berths. The water depths range from 5 to 11.9m. The quays and their equipment in both port areas are specially designed for heavy and high cargo. The port operating companies within the port of Emden offer customized and innovative logistical solutions whenever it comes to shipments for the on- and offshore wind energy sector.

How does he see the future for the port of Emden? Mr Bullwinkel is optimistic, “We believe this is just the tip of the iceberg, the really high period of activity for offshore wind energy will start in 3 years time. First we have to solve the current problems with the grid connection. This is not a question of if – but when!” When the industry really kicks off there will be a large need for ports.

He adds: “I don’t think any single port is or will be able to handle one complete wind farm on its own.” Several ports will be used depending on their facilities. Who is producing and where they are producing is of importance as to which port will be involved in what project. Having a production site in or surrounding the port, such as is the case with Emden, is a huge advantage.

There is enough space to facilitate future expansion when required. There is still space in the inner port but one of the biggest advantages of the port is that there is still a lot of development space, around 1.300hs, outside the inner port which has direct access to deep water. He refers to two development zones, the Wybelsumer Polder, adjacent to the Larrelter Polder which is considered for the expansion of the RoRo shipments, and the slightly more distant Rysumer Nacken with an area of 500hs.

The Rysumer Nacken area previously fell under the jurisdiction of the state of Germany but due to an exchange it is now fully under the federal state of Niedersachsen. It can be developed as soon as investors are found. Already there is the Knock pier which already functioned as a handling facility for wind energy components and other heavy cargo. Several wind turbines for testing purposes located at the Rysumer Nacken have been handled here. The electricity generated by these test turbines might even be used by future companies to be based there.

With this in mind the port has the possibility to grow along with the growing offshore wind industry, not only serving several wind farms in the German and Dutch sectors of the North Sea but also in the UK sector, especially the North East. Mr Bullwinkel explains: “The UK ports are not yet really prepared for the offshore wind industry as far as we can see at the moment, and the port of Emden is ready to fill this space. Having a RoRo service between the UK and the port could be an advantage here. These regular reliable services may as well be used for transporting components.” All in all Mr Bullwinkel is positive, “We have a good chance and are willing to take it!” 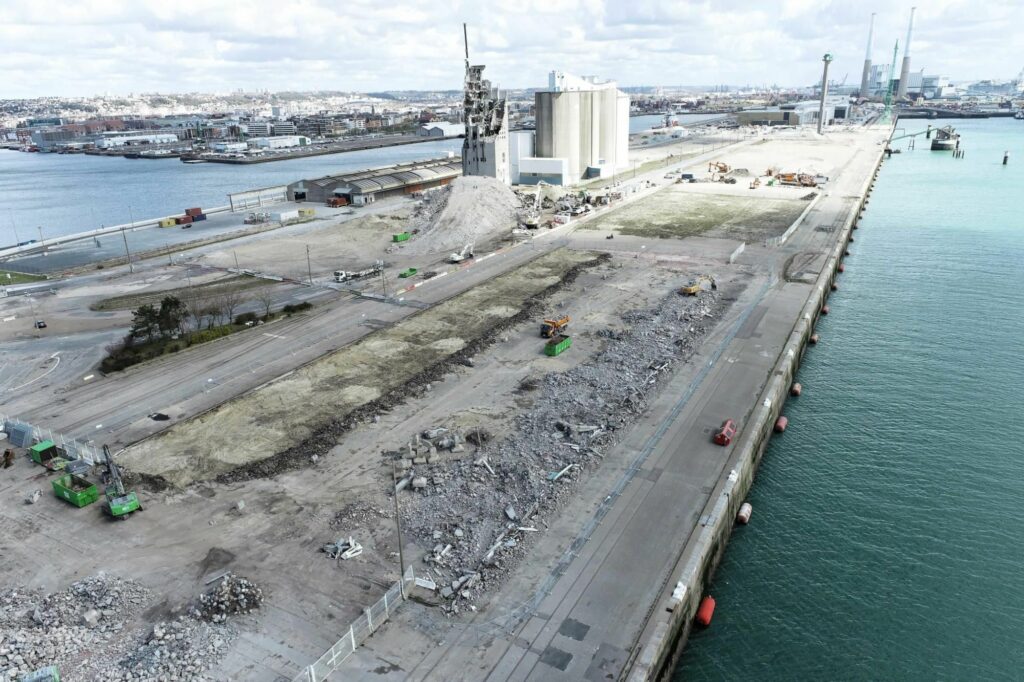