At the beginning of September, Liebherr delivered the second heavy lift offshore crane type MTC 78000 straight from its manufacturing plant in Rostock. The MTC 78000 is one of the biggest offshore slewing cranes worldwide. With a maximum dynamic torque of 78,000 mT, the MTC 78000 is the most powerful machine within the extensive range of cranes and material handling machines offered by the Liebherr group of companies. Four units of the new heavy lift crane have already been ordered to date.

Despite its size, the MTC 78000 has been designed as a slewing crane and is supported by traditional large diameter antifriction bearings. With a weight of 70 tons, the swing ring has a diameter of approximately 9 m. The manufacturing of such large mechanical parts can only be accomplished through complicated custom processes as conventional gear cutting machines are only available for large diameter antifriction bearings up to a diameter of 5 m. Therefore, Liebherr has acquired correspondingly sized machines and equipment specifically for the mechanical machining of these flanges.

The onsite erection and assembly of the large size crane on the heavy load vessel OSA Sampson presented Liebherr engineers with special challenges – for example, the planning of the individual hoists so that the maximum permitted ground pressure of the pier was not exceeded. As the assembly starting date depended on the arrival of the heavy load vessel and the required lifting equipment needed to be ready on short notice, Liebherr exclusively used their own cranes for the assembly. Two large LHM 600 mobile harbour cranes were used in tandem operation for the heavy duty lifts. Both cranes with their maximum load capacity of 208 tons each enabled parts weighing up to 400 tons to be mounted in tandem operation. The machines were equipped with the recently patented innovative Liebherr Sycratronic® control system. In combination with the Dynamic Anti Collision System the Sycratronic® controls the simultaneous operation of the mobile harbour cranes, so ensuring best possible performance and protection for the cranes.

The assembly of the MTC 78000 required several spectacular heavy duty lifts. First, the slewing platform was mounted – at 370 t, the heaviest of the components. Thereafter, the machinery compartment with the drive components (approximately 240 t), the mast lower section (about 250 t) and the mast upper section (around

160 t) of which the lowest point needed to be hoisted up to over 43 m above the pier level. This hoisting height was made possible by equipping the mobile harbour cranes with two corresponding tower extensions.

The last step in the assembly process involved putting the boom in place. In a tandem hoist operation, the 87 m boom was positioned with millimetre precision at the respective connection points enabling the boom to be pinned to the slewing platform on both sides. The sheer size of the pins required a specially developed hydraulic pinning machine.

A big challenge posed the rope assembly of four 1.6 km long boom hoist winch and lifting ropes which was handled with special auxiliary devices and high work input to finally fit the crane with the 60 t main hook.

CBO 3600 with a maximum lifting capacity of 100 t was installed on the heavy load vessel OSA Sampson.

As first of all the base column of this crane also had to be welded onto the vessel the mechanics decided to assemble the crane on the test stand in Rostock before arrival of the vessel. The lifting and installation of the CBO 3600 on board was done in one step. This procedure reduced the duration of the project considerably. The crane transport from the test stand to the vessel was accomplished with a suitable platform trailer.

Due to precise project planning, the specially trained team of 50 mechanics was able to assemble the MTC 78000 in only 23 days.

The heavy lifting test of the large crane was carried out in the open sea with a 1,760 t test weight – corresponding to 110% of the nominal load capacity. The test loads consisted of two water filled pontoons which were lifted out of the water and turned around.

After the successful test, the client could be delivered with the heavy load vessel OSA Sampson. The OSA Sampson is one of the largest heavy load vessels worldwide and is being used for platform reconditioning, pipe laying and to set up offshore wind power plants.

The dead weight of the new heavy-lift offshore crane is 1,420 t without the base column which weighs approximately another 300 t – depending on its design.

The size of the MTC 78000, which is derived from customer requirements, represents a new dimension in product development for Liebherr. Thereby, the crane’s design is characterized by state-of-the-art drive technology. The drive concept is based on an electro-hydraulic drive with 8 x 500 kW or 4 MW power. The two main winches offer a line pull of 500 kN (50 t) with a rope diameter of 48 mm.

High safety standards are among the most important criteria to be fulfilled during the development of the new offshore crane. The standard equipment of the MTC 78000 features the proven Litronic control system with integrated display of load and radius as well as automatic load moment limitation. This is completed by special overload protections which are either activated electronically (AOPS “automatic overload protection system”) or manually (MOPS “manual overload protection system”). The crane’s auxiliary hoist is fitted with a constant tension system exerting a tensile force on the hoist rope in case of significant wave height, thus ensuring that the hook follows the moving load. 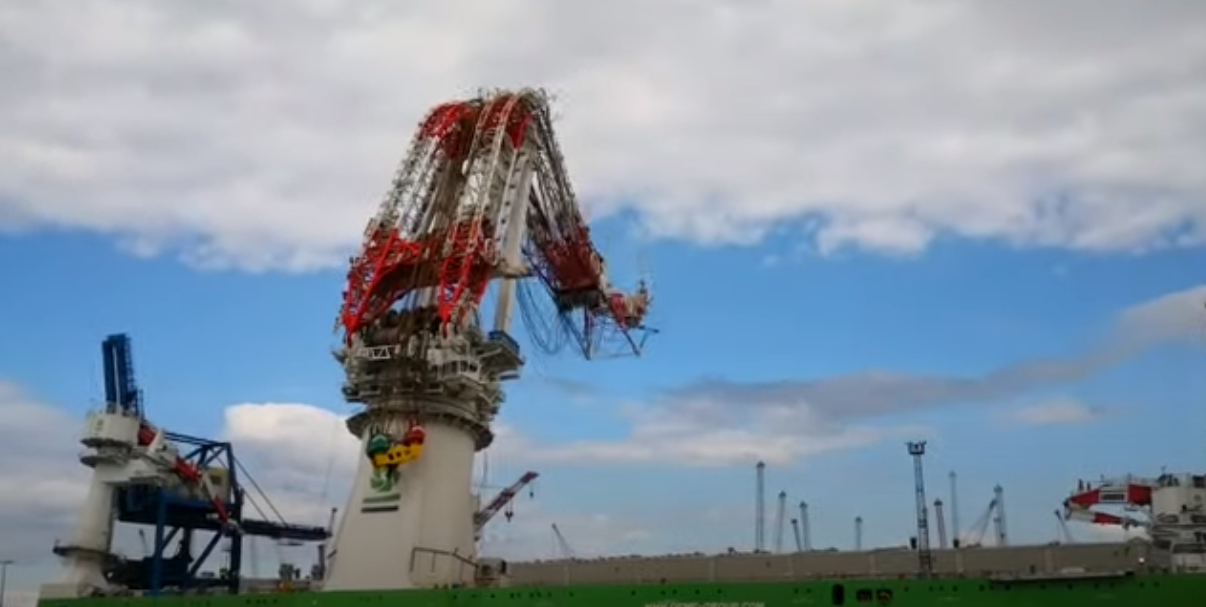