Subject to the customary approvals, conditions and relevant employee consultations, the combined company will be renamed Seaway 7 ASA and will initially retain OHT’s listing on Oslo’s Euronext Growth market, with a view to a future listing on Oslo Børs.

The transaction will create a listed, pure play renewables company, headquartered in Oslo and focused on offshore fixed wind, the companies said. Subsea 7 will retain its business in floating wind, which will not be part of this transaction.

”As a listed company with a comprehensive fleet and experienced management team, Seaway 7 ASA is positioned to forge an enhanced growth trajectory as a global leader in offshore wind. Subsea 7 looks forward to working closely with Seaway 7 as it launches this next exciting chapter in its evolution,” John Evans, Chief Executive Officer at Subsea 7, said.

The combined company will employ around 600 people and be a single supplier providing a range of standalone, integrated, or EPCI offerings encompassing installation of wind turbines, foundations, offshore substations, submarine cables, and heavy transport.

It will operate an active fleet of ten vessels and two foundation and turbine installation vessels under construction and expected to be delivered in 2022 and 2023.

Torgeir E. Ramstad, Chief Executive Officer, OHT said: ”Subsea 7 is a highly respected company and we are delighted that it sees OHT as a natural partner in creating a new global leader in renewables. We are committed to translating the leading capabilities that the combined company will offer into benefits for clients within the offshore fixed wind industry.”

Subsea 7 will own 72 per cent and OHT’s shareholders 28 per cent of Seaway 7 ASA.

Completion of the combination is subject to approval by the shareholders of OHT at an extraordinary general meeting.

The Board of Seaway 7 ASA will comprise four directors nominated by Subsea 7 and one nominated by OHT’s largest shareholder, Songa Corp. It will be chaired by Rune Magnus Lundetræ.

As the majority shareholder, Subsea 7 will consolidate Seaway 7 ASA in its financial statements and the entity will benefit from financial, operational, administrative, and strategic support from the Subsea 7 Group.

It is anticipated that the transaction will be accretive to Subsea 7’s earnings from 2024 after the delivery of the two newbuild vessels.

Transaction completion is anticipated by the end of the third quarter of 2021, subject to approval by OHT’s shareholders, regulatory approvals and other customary completion conditions.

Subsea 7’s Renewables business unit has since 2009 installed over 700 foundations, more than 30 substations, and over 800 kilometres of submarine cables using its fleet of two heavy lift vessels, two cable lay vessels, and an installation support vessel.

The first, due for delivery in 2022, is a customised wind turbine foundation installation vessel equipped with dynamic positioning and a unique “smart deck” for efficient installation of monopiles as well as jacket foundations.

The second, due for delivery in 2023, is a jack-up heavy lift vessel capable of installing the largest wind turbines as well as wind turbine foundations.

Seaway 7 ASA will offer a full range of specialist standalone transport and installation (T&I) services, as well as integrated T&I and EPCI solutions that combine the installation of turbines, foundations, substations, and cables.

While the foundation installation market is currently competitive, the markets for cable lay and turbine installation are more favourable and installation capacity in all markets is expected to be absorbed by 2025, Subsea 7 said. The market dynamic of all three sectors is expected to improve materially from 2025 onwards. 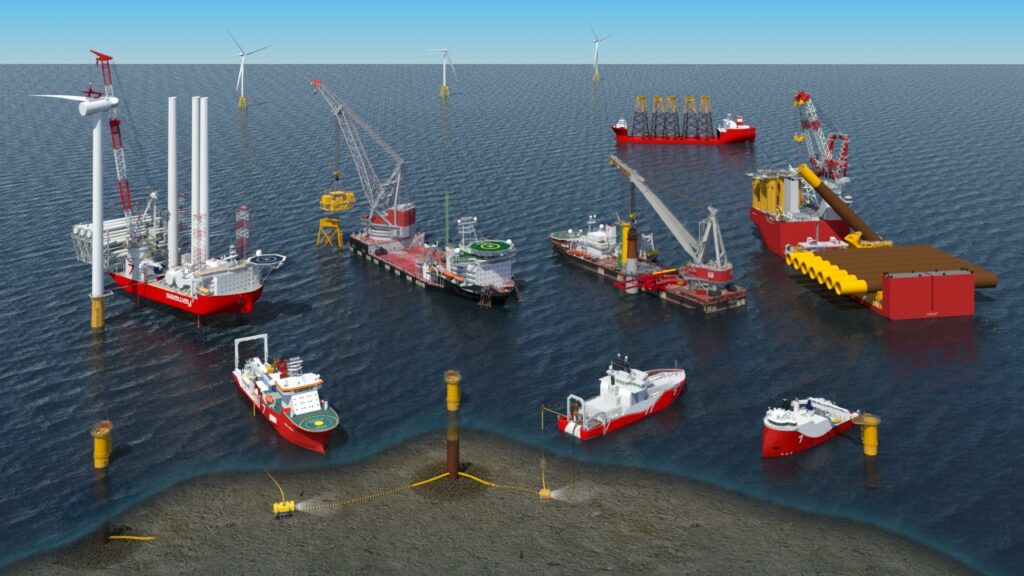