Another company involved in the oil & gas sector has set its sights on offshore wind, as the industry increasingly moves towards renewable energy amid the global energy transition. The latest to announce its clean energy plans is BW Offshore, which is now in investment discussions with the floating wind company Ideol.

The Norway- and Singapore-headquartered FPSO operator BW Offshore revealed on 10 February that it was in advanced discussions on a potential strategic investment in the French floating wind technology developer Ideol. The negotiations come as part of BW Offshore’s long-term strategy and ambitions for investing in floating offshore wind, according to the information from the company.

BW Offshore has a fleet of 15 floating production storage and offloading units (FPSOs) worldwide, and has executed 40 FPSO and FSO projects in its 35 years of operations.

Ideol is the developer of the Damping Pool foundation, a technology that optimises the stability and performance of a floating wind turbine, even in extreme conditions. The floating wind company has so far installed two full-scale demonstration wind turbines on its patented floater design, one in France and one in Japan, and is currently involved in several projects as co-developer in Japan, the U.S. and Europe.

Ideol’s technology has been deployed as part of the Floatgen project at the SEM-REV test site off Le Croisic, France. The Vestas V80 turbine mounted on the Damping Pool foundation started delivering electricity to the French grid in September 2018. This January, Ideol reported that the 2 MW Floatgen wind turbine produced 14 per cent more power in 2020 than in 2019, reaching an annual total of 6.8 GWh.

In Japan, Ideol’s floating foundation has been installed within the Hibiki demonstration project, launched by Japan’s New Energy and Industrial Technology Development Organization (NEDO). The Hibiki system features an Aerodyn SCD 3MW two-bladed turbine installed on Ideol’s Damping Pool floating foundation, deployed 15 kilometres off the coast of Kitakyushu City. The wind turbine has been in operation since 2019. 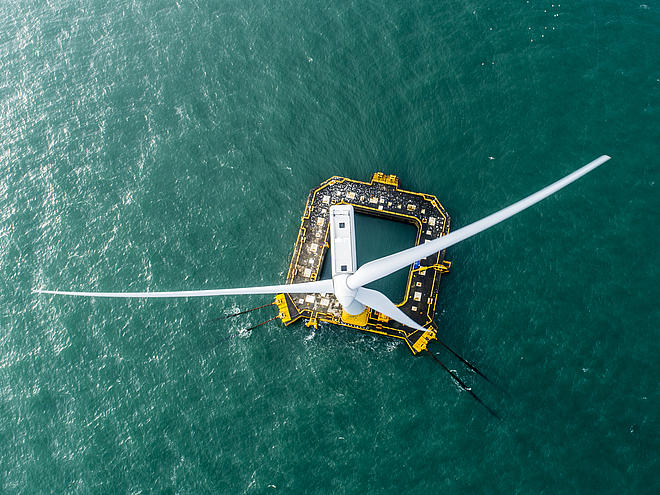