RWE and its project partners have signed lease agreements with The Crown Estate to develop extensions of the Gwynt y Môr, Galloper, Greater Gabbard and Rampion offshore wind farms in the UK.

Developers will now be focused on environmental assessments and surveys, before seeking planning consent through the statutory planning process and securing connections to the grid.

According to RWE, the consenting processes are expected to take three to five years with participation in auctions for a Contract for Difference (CfD) and construction following thereafter. The wind farms could become fully operational towards the end of the decade.

Furthermore, it was decided to seek to develop the remaining seabed option at the original Zone 6 of the existing Rampion wind farm and combine this with the extension project.

“I expect the four offshore wind extension projects to bring significant benefits to the UK energy infrastructure and economy. They present a potential multi-billion pound investment and could grow the local supply chain as well as lead to the creation of hundreds of jobs,” said Tom Glover, RWE Renewables CCO and RWE UK Country Chair.

The Gwynt y Môr extension project, located off the coast of North Wales, is called Awel y Môr and will have a capacity of up to 576 MW.

The Galloper extension called Five Estuaries has a potential capacity of up to 353 MW and the Greater Gabbard extension, renamed North Falls, has an agreement for up to 504 MW.

The Rampion 2 development project has a potential capacity of up to 1,200 MW and is located off the coast of Sussex in the English Channel.

These four project AfLs come in addition to the previously announced lease agreements for the proposed extensions to Thanet, Sheringham Shoal and Dudgeon offshore wind farms.

RWE holds a 60% stake in the Awel y Môr project and its project partners are Stadtwerke München with 30% and Siemens Financial Services with the remaining 10%.

The project partners for the Five Estuaries extension are the same as the operational Galloper wind farm and include a Macquarie-led consortium, RWE and Siemens Financial Services, each holding a 25% share, as well as ESB and Sumitomo Corporation, each with 12.5%.

RWE is leading the development of the two projects.

North Falls is owned by a 50/50 joint venture between SSE Renewables and RWE. The project will be developed by the project company with a team comprising staff from both owner companies.

Rampion 2 is owned by three shareholders. RWE owns 50.1%, the Macquarie-led consortium holds 25% and Enbridge has 24.9%.

The article was updated on 29 September at 3:00 p.m. with information on the project partners. 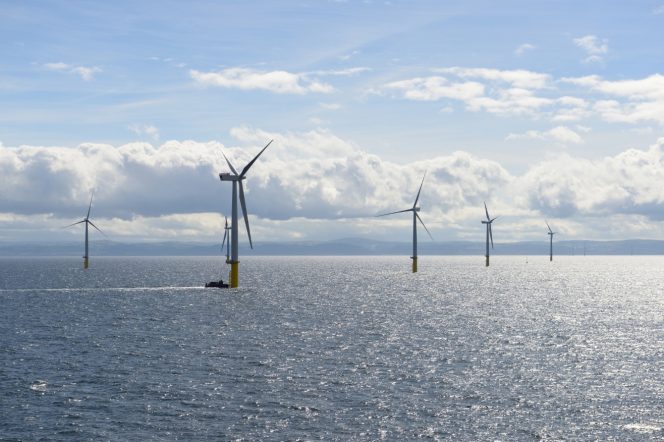