The Wind Energy sector has been experiencing a solid growth in the recent years, with a total installed capacity increasing over threefold in the 2010-2018 period, passing from 185 GW to 600 GW. While the on-shore wind Industry reached its maturity and it is expected to keep delivering a steady 45-50 GW of additional capacity each year, the off-shore wind sector is surging. According to the Global Wind Energy Council (GWEC) the off-shore installations should account for over 20% of the total added yearly capacity by 2023, reaching a total capacity of 63 GW (compared to 23 GW in 2018). 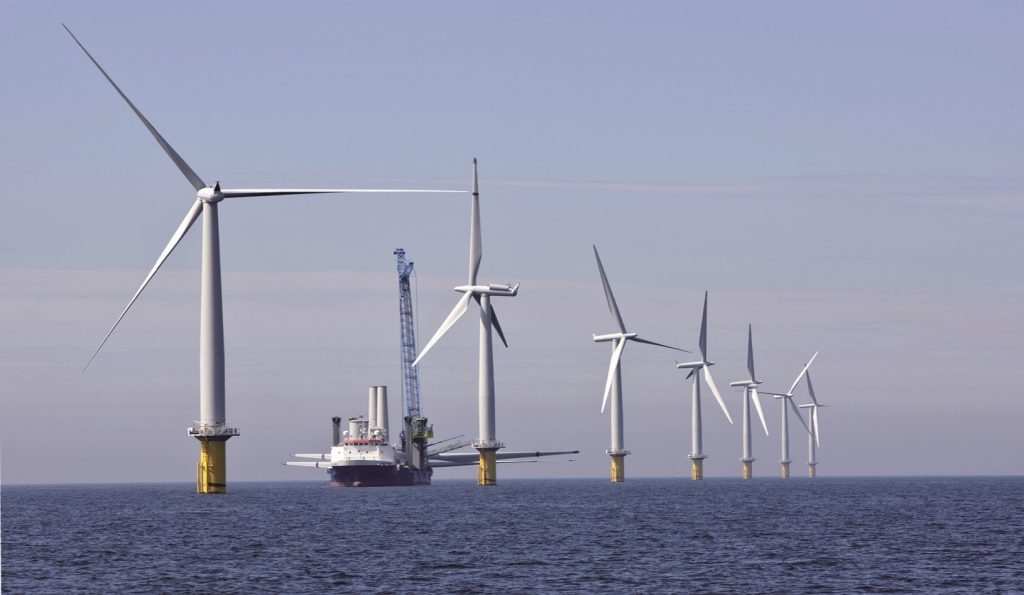 The main drivers could be summarized as follows:

However, compared to on-shore installations, building off-shore farms presents several technical difficulties. In particular, it results very challenging to provide large and very large turbines (nowadays reaching up to 12MW) with a solid anchoring to the seabed. According to the Norwegian Energy Partners Global Off-shore Report 2018, off-shore foundations accounts for approximately 14% of the total Project LCOE in Europe. This figure is likely to be even higher in other Markets where seismicity forces the Developers to design heavier foundations (such as for Countries surrounding the Pacific Ocean – the so-called ring of fire). The same Report states that the towers contribute for approximately 4% of the aforementioned LCOE.

It is hence likely to assume that in certain markets, foundations and towers combined would account for approximately 20% of the total Project LCOE. This is why reducing the cost of such heavy equipment becomes of critical importance.

Both towers and foundations are comprised of large plates rolled into cans and cones; such workpieces are then welded together in large sections which, in the case of Pin-Piles or Monopile foundations, can reach up to 100m. With plates thickness often exceeding 140mm, increasingly large diameters (>12m) and very strict dimensional tolerance requirements, the fabrication of off-shore foundations is certainly the most challenging and time consuming rolling operation.

Fabricators are hence in need of a technology partner able to deliver high performance and reliable rolling machines, capable of sustaining the demanding serial production characteristics of this Industry by increasing rolling accuracy, output and Operators safety while decreasing downtimes, floor-to-floor processing time and manpower requirements.

DAVI is leading the Market thanks to its cutting-edge technology developed working along the most accredited towers and foundations manufacturers as well as Project developers in order to anticipate the Market needs. DAVI is already the technology partner of choice of most major Players, with over 250 installations dedicated to the Wind Industry worldwide and approximately 60% of the overall Wind Energy rolling machines market share. 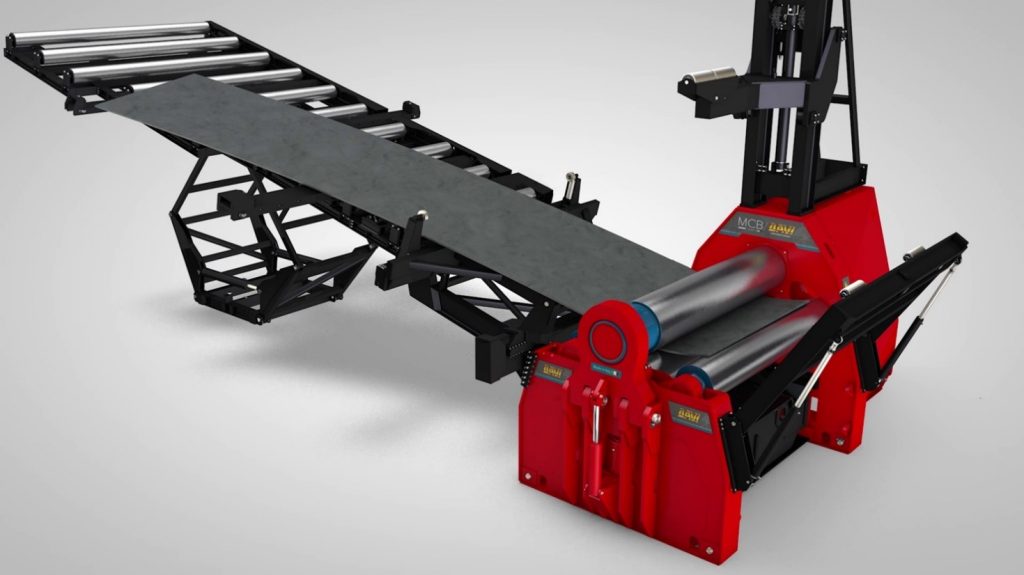 The DAVI High Productivity Line introduced to the Market innovative CNC-controlled features such as the possibility of executing exacts first pre-bending at the beginning of the rolling process, thanks to the patented infeed lifting conveyor. By lifting together with the bending rolls, the conveyor supports the plate while pre-bending, completely eliminating the distortions which would otherwise occur due to counter bending forces generated by the plate own weight. 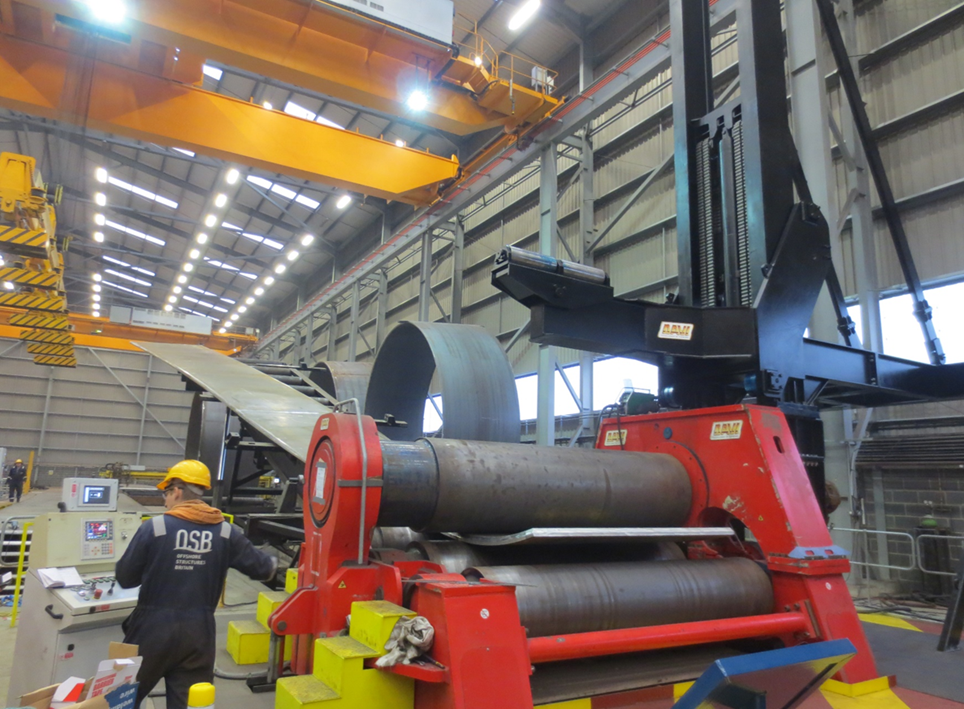 While rolling large diameters workpieces, the front edge would “close” under its own weight and adjustment operations would be needed in order to avoid overlapping with the trailing edge. As part of the High Productivity Line, DAVI’s patented pushers with hooking fingers installed on the lateral supports, completely eliminate the risk of overlapping as well as allow for perfect positioning and alignment of the two plate edges at the end of the rolling process in preparation for on-machine tack welding. The two features combined can increase the operation speed by 25%/30% (compared to manual process).

Moreover, cone forming is recognized as the most challenging rolling process. Forcing the plate edges to travel at two different speeds, the process generates high stress on the rolling machine as well as on the plate itself. On a typical wind cone application, it is of paramount importance to protect the integrity of the bevels which must be realized prior the rolling process (due to high costs involved in beveling the plate after it is formed into a cone or can). For this reason, the state-of-the-art Wind Towers & Foundations cone rolling involves a step-by-step forming process where, at each step, the plate must be repositioned in order to make sure that the cone generatrix overlaps the top roll axis. Depending on accessories installed, this repositioning would both take a very long time, deplete the final workpiece tolerances and potentially put the Operators at risk. 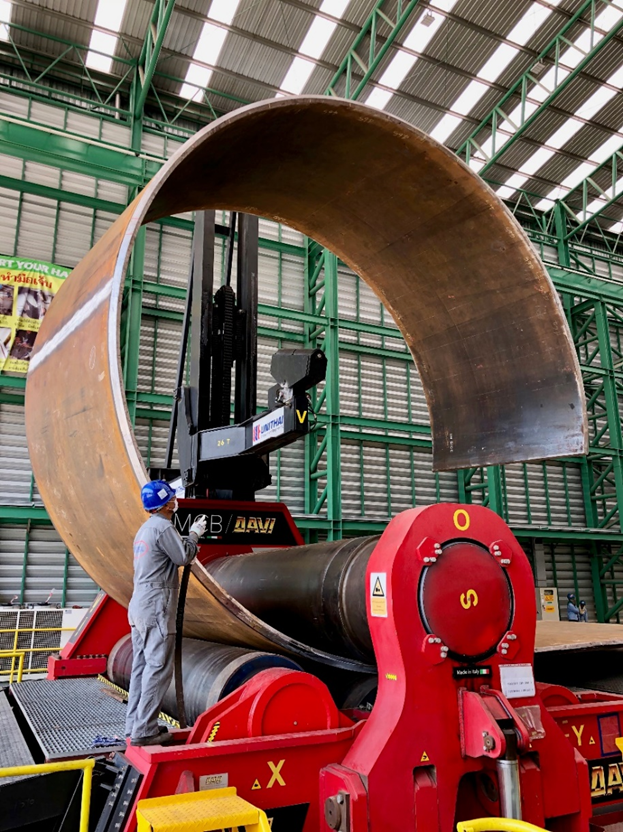 DAVI responded to the Industry needs by introducing a ground breaking fully automated cone forming system. This is achieved by positioning and guiding the plate while cone forming without damaging the bevels (wide contact surface) for plates up to 100mm. This system allows for a complete cone forming executed by a single Operator, with maximum repeatability, highest accuracy and the shortest possible floor-to-floor time (30%-50% faster compared to manual process).

The whole process consisting of plate positioning, squaring, pre-bending, rolling and aligning for tack-welding, can be completed in less than 20 minutes even for high-thickness plates.

With DAVI you can achieve much more

By joining forces with you from the very initial phases of any new Project, including the pre-award, DAVI will offer unparallel insights on the worldwide Wind Energy fabrication business practices and new trends as well as allow you to be accredited with Major International Developers and Fabricators.

We will support your decision-making process, analyzing the specific production needs and helping you select the correct machine configuration to achieve the shortest possible return of investment.

With the shortest delivery on the Market thanks to over 100 machines continuously available on-stock, we will fit even in the most demanding production schedules, allowing you to secure the project before acquiring what will become one of your major fabrication assets.

Once entered in the DAVI World, an expansive team of dedicated after sales personnel will support you during production throughout the whole machine lifetime.

Select DAVI as your technology partner: together we can achieve much more! 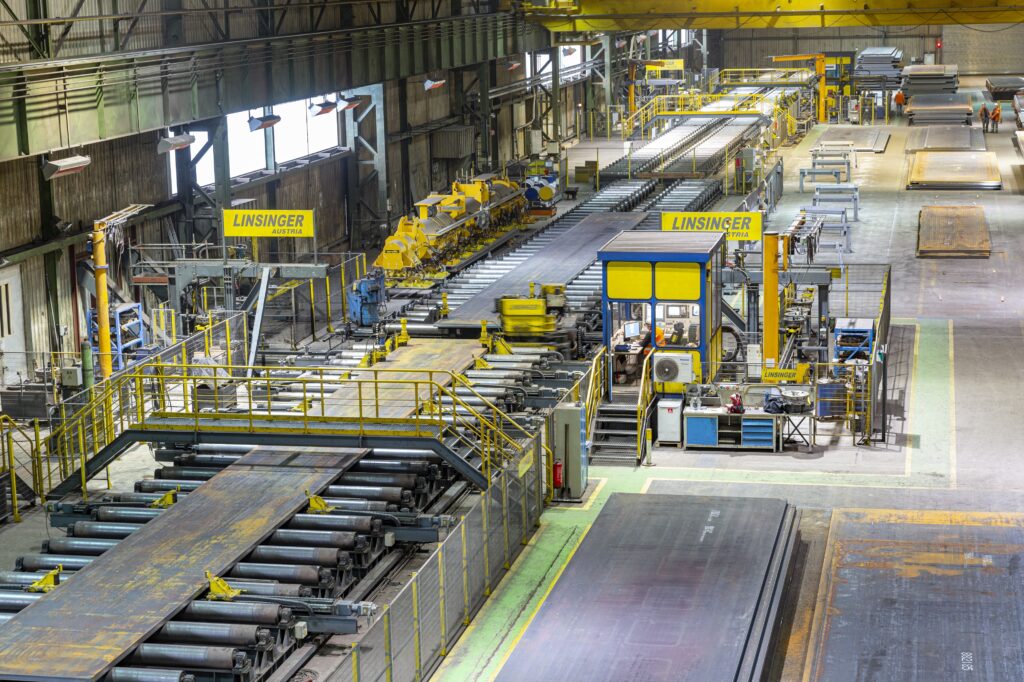