LM Wind Power has rolled out the first blade for GE’s Haliade-X 12MW offshore wind turbine at its factory in Cherbourg, France.

According to the company, the 107m long blade, the world’s largest, has made its first trip outside the factory.

Final preparations for the shipment of the LM 107.0 P blade to Maasvlakte-Rotterdam in the Netherlands are now underway.

GE Renewable Energy announced in March last year that it will invest more than USD 400 million to develop and deploy Haliade-X 12MW, the world’s most powerful offshore wind turbine.

The turbine is being assembled at GE’s factory in Saint-Nazaire, while the four tower sections that will be part of the turbine recently arrived in Maasvlakte-Rotterdam from GRI’s site in Seville, Spain.

Haliade-X 12MW will be installed in Rotterdam this summer and will be placed onshore to facilitate access for testing. It is expected to allow the collection of data during the initial period of operations which is needed to obtain the Type Certificate in 2020 and ship first commercial units in 2021. 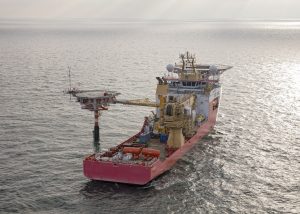