Offshore wind energy projects off the coasts of Rhode Island and Massachusetts are aiming to start construction next year and bring an energy source familiar in Europe to the U.S. for the first time, company executives said this week in Atlantic City at the industry’s major annual conference.

“This is the year it happens,” said Jeff Grybowski, CEO of Deepwater Wind, developer of the Block Island Wind Farm off Rhode Island and three other projects. Also forging ahead is the much-anticipated Cape Wind project in Nantucket Sound, Massachusetts. “It’s an exciting time for the U.S. offshore wind industry,” said Dennis Duffy, Vice President of Regulatory Affairs for Energy Management Inc. (EMI), developer for Cape Wind. “Cape Wind is closing its financing this fall and looking forward to the start of construction.”

“We are going to put steel in the water in 2015,” said Tom Kiernan, CEO of the American Wind Energy Association (AWEA). “By developing offshore wind power, we can create well-paying jobs, attract billions of dollars in private investment into our national economy and reduce carbon dioxide emissions for generations to come.”

While the U.S. offshore wind power industry is gaining momentum, many industry leaders recognize that to maintain it, Congress must provide policy stability by extending both the Production Tax Credit (primarily used by land-based projects) and the Investment Tax Credit (used by offshore and community wind developers) by the end of the year.

AWEA’s Kiernan emphasized this urgent need. “Congress must extend both these successful tax policies that have attracted up to $25 billion a year in new private investment to the U.S. economy. With these policies in place, wind power has been able to improve its technology and lower its costs by 58 percent over the last five years, saving consumers on their electric bills.”

AWEA’s 2014 Offshore WINDPOWER Conference & Exhibition brought over 600 attendees to Atlantic City this week, including government officials, private investors, members of the conservation community and others. Many said the industry is turning a corner with construction of more than one offshore wind project set to begin in 2015.

“It’s been encouraging to see so many people at this year’s conference,” said Fishermen’s Energy COO and General Counsel Paul Gallagher. “The quality of the speakers and panelists are exceptional. We are pleased to welcome everyone back to Atlantic City and we look forward to welcoming folks back when the Fishermen’s offshore wind project gets approved.” Gallagher introduced Atlantic City Mayor Don Guardian, who expressed his enthusiasm for the potential of a growing offshore wind industry in the area.

“I am encouraged by the collaborative spirit and the thoughtful planning that has been the hallmark of our approach to ensure that development is realized in the right way and in the right places,” Jewell said. “Offshore wind is an exciting new frontier that will help keep America competitive and expand domestic energy production, all without increasing carbon pollution.”

“What an exciting year for offshore wind power,” said John Kostyack, executive director of the Wind Energy Foundation. “After many years of hard work by members of the offshore wind community and its friends and allies, projects are going into the water soon. Once people see it, they know it’s real; it’s part of everyday business. Everything changes from here on out.”

Developing offshore wind power is seen as an important tool not only to boost the U.S. economy and provide an abundant supply of fixed-price domestic energy, but also to benefit the environment by fighting pollution and helping to keep our air clean.

Collin O’Mara, president and CEO of the National Wildlife Federation, joined U.S. Secretary Jewell in opening the conference. He emphasized this point, saying, “Developing Atlantic offshore wind is absolutely vital to protect our communities and wildlife from the worst impacts of global warming. I’m proud to stand with Sec. Jewell to support developing this critically needed new energy source in a way that protects wildlife and their habitats.”

The exhibition featured 40 exhibitors, including major manufacturers and developers, renewable energy experts from the state of Maryland, the Massachusetts Clean Energy Center, the U.S. Bureau of Ocean Energy Management (BOEM) and technical advisors from DNV GL

“We are excited to see the American offshore wind industry progress and we find the conference very useful for meeting our clients and partners,” said Johan Sandberg, Service Line Leader – Offshore Renewable Energy for DNV GL.

“Offshore wind is a key industry for DNV GL as it is the one industry where our five legacy companies intersect after the merger between DNV, GL, KEMA, Garrad Hassan and Noble Denton. We feel a very strong responsibility to make this industry succeed and our recent pledge to help reduce offshore wind’s costs demonstrates this. We are committed to making offshore wind power an important part of the U.S. energy mix.”

Chairing the closing keynote session on Wednesday is the U.S. Department of Energy’s Senior Advisor for Offshore Wind Technologies, Gregory M. Matzat. The session will tackle the three offshore wind power projects for which the DOE has awarded seed funding: Dominion Virginia Power, Fisherman’s Energy, and Principle Power will each receive up to $50.6 million to complete their designs and construct projects off Virginia, New Jersey and Oregon.

“As a readily expandable, domestic source of clean, renewable energy, wind power is helping pave the way to a low-carbon future that protects our air and water while providing affordable, renewable electricity to American families and businesses,” said Jose Zayas, Director of the Energy Department’s Wind and Water Power Technologies Office.

“While land-based wind energy now contributes over 4.5 percent of the nation’s electricity, the offshore wind industry in the United States has also been steadily gaining momentum,” Zayas said. “Within the past year, the Energy Department has released a number of reports and tools to help industry and policymakers, announced a conditional commitment for a loan guarantee for Cape Wind, and announced the selection of the three advanced technology demonstration projects to continue to the next phase.” 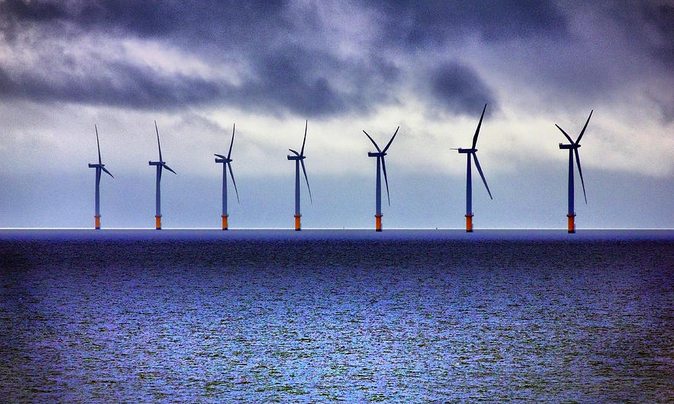