SeaZip to Double Passenger Capacity of Its Crew Transfer Vessels

SeaZip Offshore Service will transform its 12 PAX crew transfer vessels (CTVs) into 24 PAX over the upcoming winter break, the company said on 24 January. The vessels, with double the passenger capacity, will be operational again from March-April 2022.

The major capacity expansion concerns four vessels, the SeaZip 3 to SeaZip 6, built by Damen Shipyards and operated since 2015/2016. The upgrade, to be carried out by Next Generation (NG) Shipyards, will involve expanding the passenger compartment and installing a sophisticated air conditioning and ventilation facilities.

The work coincides with the annual maintenance check, after a season in which the vessels have sailed almost uninterrupted services, SeaZip Offshore Service said, adding that the company was involved in an above-average number of short-term projects in the offshore wind industry and in three offshore oil and gas projects.

According to a press release from the company, the decision of SeaZip Offshore Service’s management to double the passenger capacity was prompted by the dynamics of the market.

“We see an increasing demand for flexible and cost-efficient transport solutions for both smaller maintenance teams and larger groups of technicians”, said the company’s managing owner Jan Reier Arends. “Groups of 16 to 20 people are the rule rather than the exception. More space per vessel provides the industry with more clout with considerably lower transport costs. By reducing the number of shifts, we also reduce the total emissions. Not unimportant in a sector that is committed to sustainable energy”.

The company also noted that its vessels will continue to sail under the Dutch flag in their 24 PAX version since the recent change in law now facilitates this, opposed to previous regulation in Dutch maritime legislation that made this impossible. This change in law has accelerated the decision to make the SeaZip crew transport vessels suitable for 24 passengers, the company said. 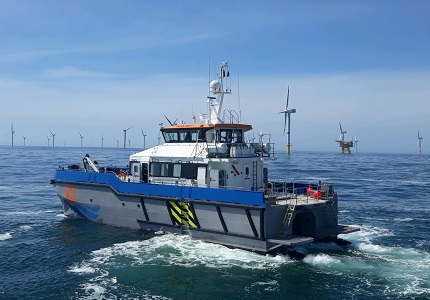