Enterprize Energy (EE) has signed a contract with PTSC G&S and Fugro to supply, install and operate a floating LiDAR at the site of the Thang Long Wind project offshore Vietnam.

Fugro and PTSE will deploy Fugro’s SEAWATCH Wind LiDAR Buoy to collect detailed wind resource, meteorological, and oceanographic data across the 2000 km2 project site over the next 12 months.

The technology – comprising the SEAWATCH Wavescan Buoy as a platform into which the ZX 300M LiDAR is integrated – will track air pressure, humidity, air and water temperature, wave height, and current, with support from a guard vessel which will also track fishery activity and supplementary ocean data from its own onboard sensors.

The 3.4 GW Thang Long Wind project in Binh Thuan province is the only offshore wind project in Vietnam that has received approval from the Government of Vietnam and the Ministry of Industry and Trade for the survey and preparation for Power Development Plan’s inclusion, as a basis for investment implementation.

The survey results obtained so far confirm the great potential of the offshore wind energy resources in Vietnam, the developer said.

EE Group will complete the installation of FLIDAR in July to collect oceanographic data on waves, wind, and currents at the project survey area.

Ian Hatton, Chairman and Founder of Enterprize Group, said: ”Based on documents from international organizations and data centers in Vietnam combined with survey data after nearly two years collected in the proposed project development area, we fully believe that Thang Long Wind project will be a world-class energy project and a breakthrough for the Vietnamese economy in the next 5 to 10 years.”

EE Group, in conjunction with engineering and financing companies, and Vestas, the preferred turbine supplier, has proposed a set of documents to include the Thang Long Wind project into in Vietnam’s National Power Development plan for the period of 2021-2030.

The Ministry of Industry and Trade has completed the appraisal based on the opinions of 13 Vietnamese ministries, sectors and corporations and reported to the Prime Minister in 2020 with the expectation that the project’s Phase 1 will generate electricity by 2025 and the entire project will be completed by 2030.

EE Group has proposed a solution to handle the instability of Vietnam’s grid through the use of an available air electricity storage system (LAES) combined with hydrogen derived through electrolysis of seawater. The 500 KV transmission line system with a length of 270 kilometres from Binh Thuan to Dong Nai and Binh Duong will be financed by EE to feed the electricity from the project to the grid.

Truong Tuan Nghia, Director of PTSC G&S, said: ”With the support from ENTERPRIZE ENERGY, together with our long-standing partner – FUGRO SINGAPORE MARINE, and commitment from all levels of our organization, PTSC G&S is fully confident that the Project will be completed within the agreed time schedule, to the highest quality and safety standards.”

EE plans to build the USD 11.9 billion wind farm in five phases. The first phase will have a capacity of 600 MW and is scheduled to be completed in 2025. The project’s fifth and final phase is expected to come online in 2030.

The wind farm will feature Vestas wind turbines with an individual capacity of between 10 MW and 17 MW. 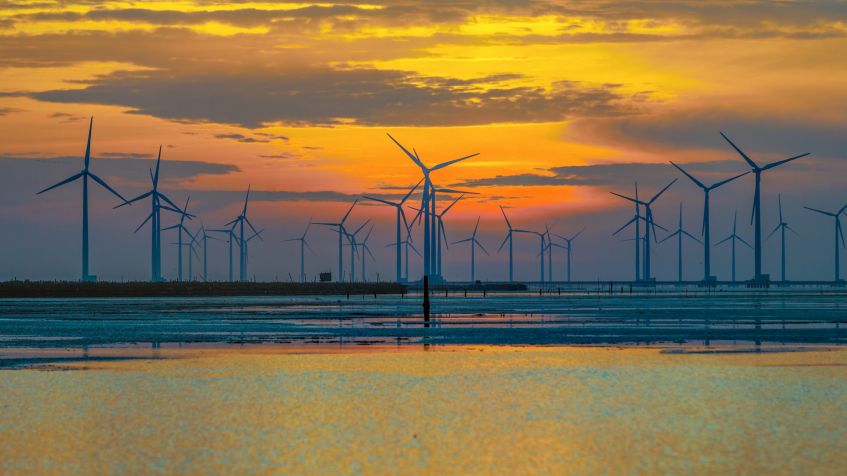