Offshoretronic has unveiled a dual crane wind turbine installation vessel design and a novel concept called ADD-ON Installation Support Tower, which can be fitted onto the vessel.

The company, headquartered in Spain, said that this transportation and installation method could provide large cost savings by utilising the same monohull crane vessel for installing all kinds of offshore wind foundations and for the transport and installation of fully assembled wind turbines.

According to Offshoretronic, the concept allows for the transport and installation of two completely assembled wind turbines of up to 11 MW in one single round trip. This can save around 40 per cent in costs through operations and around 15 per cent in fuel consumption, compared to large Jack-up vessels, the company said.

With larger wind turbines, the vessel can install the turbine tower and the nacelle assembled in one single unit, while the blades could be installed with a smaller size jack-up vessel in assistance mode.

The ADD-ON Installation Support Tower is fully modular and can be installed and removed by the vessel’s own heavy lift mast cranes, Offshoretronic said.

To allow for smaller and lighter support tower construction, all weight of the turbine is supported on the lower support beam and by the crane boom wires, giving additional load stability and support to the support tower. The lifting and lowering of the wind turbine is done by a mast crane main winches with a lifting and heave compensation capacity of 1,200 tonnes, Offshoretronic states.

“The safety aspects of our new Concept Design has our highest priority. Therefore, the Turbine Tower will be resting and secured on a Support Beam during transportation and both top and bottom grippers will have two additional secondary retentions around the Turbine Tower. This will give extra support and allow for a very safe transportation and installation process of the turbine”, the company explained.

Offshoretronic’s Project Director Jeroen Berkhout said the offshore wind sector is expected to mainly opt for larger wind turbines ranging from 12 MW to 15 MW in the coming years, but that over the next decade turbines in the range of 9 MW to 11 MW turbines will still be produced and installed.

This is especially true for projects in more remote areas for logistical reasons, as well as in areas that would face hurricane wind gusts and require smaller size reinforced, hurricane-proof turbines, according to Bertkhout, who said that the company therefore foresees a good market for its new concept and the dual crane heavy lift installation vessel. 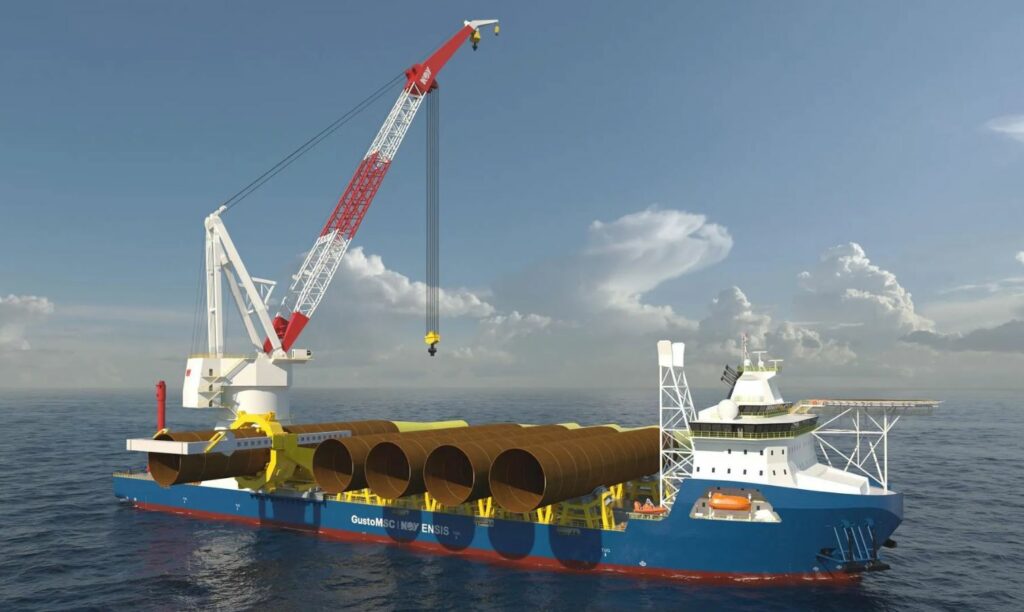