Ideol’s concrete hulls for commercial-scale floating wind farms could be built and launched in at least five construction sites in California, with two being immediately suitable without any upgrades, the French company said.

In addition, four sites were identified as suitable for wind turbine assembly and eight harbors are capable of storing mooring lines as well as hosting operation and maintenance bases.

This is one of the conclusions of Ideo’s in-depth audit of all major harbor sites and port infrastructures in California.  The company also said that its ”uniquely compact and shallow-draft concrete floating wind solution can offer the highest levels of local content.”

Ideol did not reveal the locations identified as suitable for supporting the build-out of commercial-scale (50 turbines or more) floating wind farms.

On top of significantly reducing the carbon footprint of a project given the minimization of long-distance shipping and logistics, being able to tap into a local and readily available labor, supply-chain and infrastructure is a definite asset for all developers looking at favorably engaging with local stakeholders and achieving the highest level of project acceptability, Ideol said.

According to Ideol, further studies have shown that its concrete hull also offers the most competitive costs.

Paul de la Guérivière, Ideol’s CEO, has declared: “We’ve already demonstrated both in France and Japan that local content in excess of 90% can be achieved and we intend to pursue such business model when possible. We’re more than satisfied with the results of our review because it confirms our ability to facilitate projects’ acceptability while strongly limiting the carbon footprint of our floating structures. The same levels of local content in California are equally being explored at Ideol for our market-ready floating substation.”

Developed and patented by Ideol, the Damping Pool ring-shaped floating foundation had its debut last year when a 2MW Vestas V80 wind turbine was installed at the SEM-REV site offshore France. The Floatgen turbine has since ”met and exceeded all expectations and faced wave heights of up to 6.2m at the Sem-Rev test site,” Ideol said.

In June this year, the Daming Pool foundation supporting an Aerodyn SCD 3MW two-bladed turbine was installed at a site 15 kilometres off the coast of Kitakyushu, Japan. 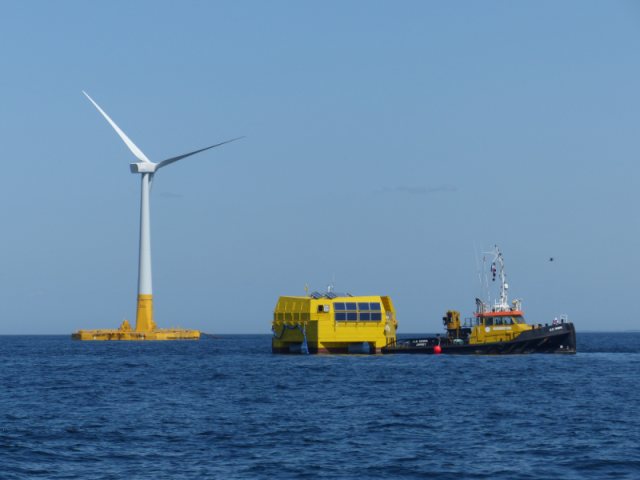