By mid-June, the hull of the first 21m vessel for wind farm industry service provider CWind was up to the gunwales, plating was underway on a second 21m craft and work had just started on both 23m HSSVs in the four vessel order. Concurrent wheel house and cabin production was also underway. The newbuilds represent a departure from CWind’s previously exclusive use of composite hulled wind farm service vessels.

The 21m symmetric hull catamarans, which are being built to MCA classification Category 2, first of which is due for launch in December and to be handed over to CWind by the end of this year.

The identical 21m vessels feature MTU V10 engines powering Rolls-Royce waterjets for an anticipated top speed of 29 knots. The beam is 7.7m and the craft have a maximum draft of only 1.35m.

Equipped for a crew of three and with seating for 12 technicians in transit. The vessels will be capable of safe personnel transfer in 1.5m significant wave height conditions in all directions, with a provision for a Palfinger PK8501M B knuckleboom crane set forward to port will expedite cargo transfer.

The 23m catamarans are Category 1 boats classed by Bureau Veritas. Again primarily intended for use as wind farm support vessels, they also have capability for dive and survey ROV operations either overboard or through a moonpool.

The main deck has been designed to take a load of 1.50t/m2.  These two vessels are due to enter service in the second quarter of 2016.

The company’s commercial director Rob Stewart said the yard’s certification to ISO 14001 and 18001 were both anticipated by the end of July 2015. 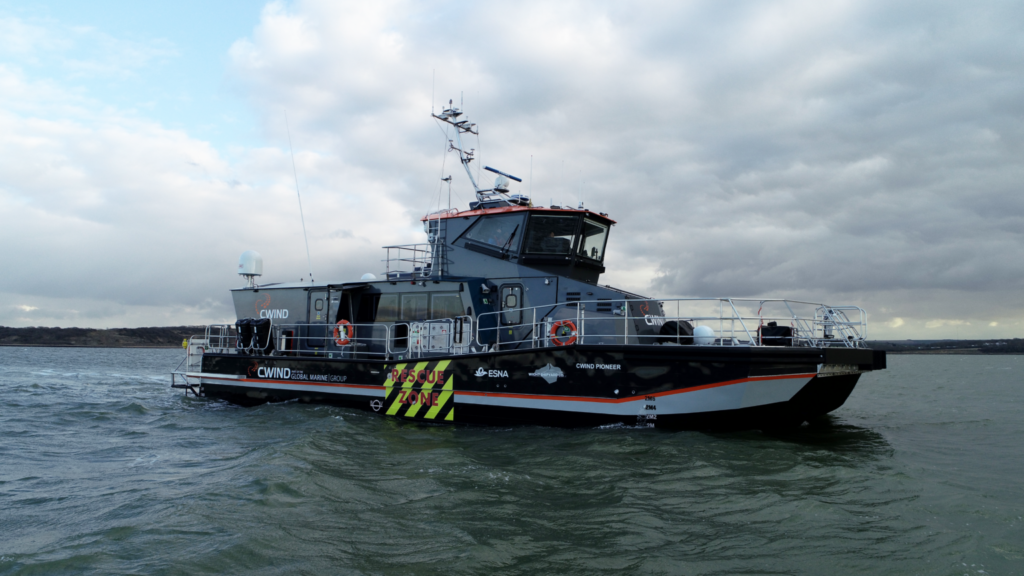