First Batch of Turbines on Its Way to Nordsee Ost

At RWE’s base port in Bremerhaven the go-ahead was given yesterday for the installation of the 48 wind turbines that will comprise the Nordsee Ost Offshore Wind Farm.

Four 240-tonnes tubular steel towers, together with the associated hubs and nacelles, were loaded onto the installation vessel “Victoria Mathias” which will transport them for installation at sea over the coming days.

“Loading of the first major components went very smoothly,” explains a relieved Marcus Dengler, RWE Innogy’s Bremerhaven Port Logistics Manager. “The team worked together hand-in-hand and load all of the over 30 meters high tower sections, together with the associated hubs and nacelles, aboard the ship using the vessel’s own crane. Last night our installation vessel left the base port and made its way to the construction site 35 kilometres to the north of the island of Heligoland, where installation will commence immediately.”

The huge dimensions of the 6 megawatt-turbines’ individual components are impressive to behold: The nacelles alone weigh-in at approximately 350 tonnes and have an equivalent in size to a detached single-family home. They house the machine’s components which include the transmission and generator. The tower itself, which comprises two individual sections, measures 70 metres overall in length and weighs over 240 tonnes. To allow these massive components to be carried by the installation vessel “Victoria Mathias”, the vessel underwent conversion during recent weeks at the Mützelfeldtwerft shipyard in Cuxhaven. The work included removing the mounting points for the foundations and replacing them with shipping braces for the wind turbines.

“Since mid-March all of the marine foundations have been firmly anchored to the sea bed. Commencement of the turbine installation now signals the second phase”, emphasises Marcel Sunier, RWE Innogy’s Project Director for the Nordsee Ost Wind Farm. “The internal cabling work for the farm is progressing according to plan. In summer we plan to install the transformer substation at sea and then connect all of the wind turbines to the grid by spring 2015.”

To ensure all of the turbines can be installed to schedule the sister vessel to the “Victoria Mathias”, the “Friedrich Ernestine”, will also be operating for the wind farm – and has been tasked with installing the 144 rotor blades. Each rotor blade is 60 meters in length and weighs some 60 tonnes. This is equivalent to the weight of six fully grown elephants. The “Friedrich Ernestine” will have up to 15 of these giant blades aboard when it makes its initial foray into the 24 square kilometre construction area in about a month’s time. The vessel is currently at the Mützelfeldtwerft shipyard where it is undergoing preparations for its operations at sea.

Following completion, the Nordsee Ost Offshore Wind Farm will have an installed capacity of some 295 megawatt, sufficient to supply the equivalent of around 300,000 households per annum with electricity. With the most powerful offshore turbines currently available, Nordsee Ost is among the largest commercial wind power projects off the German coast. 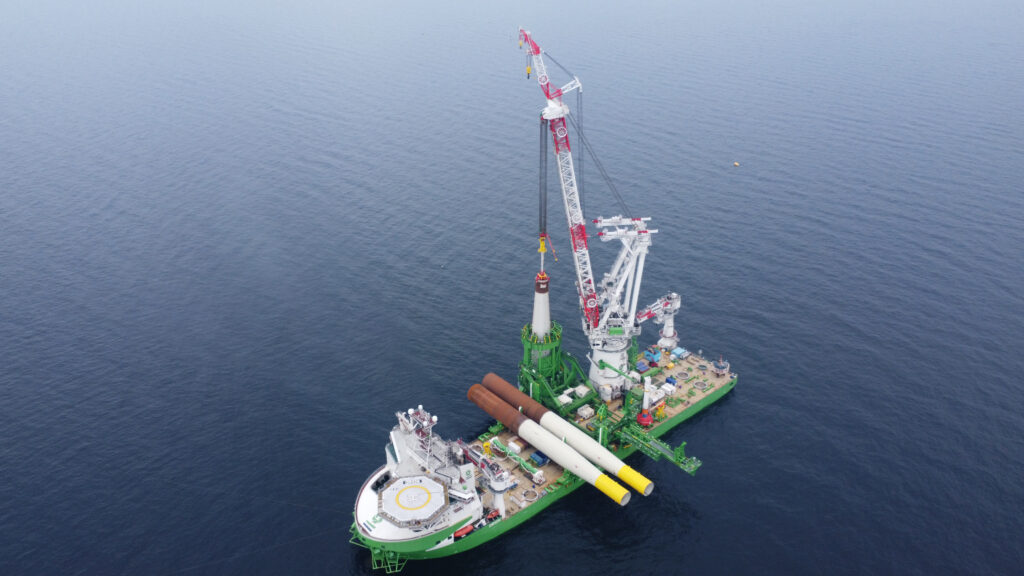