Offshore wind in Greece: The energy hub of Southeast Europe

Mediterranean countries have set targets for offshore wind development in the Mediterranean Sea by 2020. Greece has a relatively very low target of 200MW installed offshore wind capacity. This offshore development mainly concerns conventional offshore wind farm project designs. But Greece’s energy market is at the forefront of transformative changes that are attracting investors from around the world.

With Greece emerging as the energy hub of Southeast Europe, deregulation in the production, transmission, and distribution of electricity and energy supplies, and an aggressive drive for renewable sources to play a major role in energy supply, puts the country at the centre of very significant growth opportunities.

Wind power is driving growth in the renewable sector and represents a huge investment potential in Greece. Greece’s favourable, long-term legislative framework ensures Renewable Energy Sources (RES) investment and this has won the confidence of major investors. The difficult financial situation of the State and the frequent changes in legislation seems not to have discouraged the investors.

The total installed wind power capacity in Greece in October 2012 is 1,723MW. The percentage of this 2020 total made up from RES will be 18%. This is an increase of over 11% of the total in 2005. The national target which was set by the Greek Parliament in 2006 is now seen as being conservative. The RAE has stated that the Greek national electricity system could absorb the additional amount of electricity produced by wind energy, about 5,500MW, without any problem for the reliability and stability of the grid system. This capacity will be increased to 6,000-6,200MW if the wind farms in non-interconnected islands are included. However these are general figures for wind energy and not specifically for onshore or offshore installations.

In June 2006, the first regulation was passed for capability to develop wind farms on the shoreline, coast, sea or sea bed, and the conditions set for how it should be allowed. This also included the kWh feed in tariff for offshore wind farms which was set at 90 Euro/ MWh. The duration of the power purchase agreement is 20 years. This tariff was updated, later in October 2008, to 97.14 Euro/MWh.

A Special Framework for the planning of RES projects was set up in December 2008, which set limitations for the planning of offshore wind farms based on some special criteria about distances from other activities and the visual effect of the installation.

Since June 2010 the government has been busy with setting licence zones taking into consideration issues concerning the protection of the marine natural and cultural environment, and, in general, of its ecosystems, with an emphasis of the sustainability of the marine flora, fauna and ornitho-fauna, the national security, securing by priority the energy supply of the islands and the safety of shipping. After approximately two years the Strategic Environmental Assessment has not completed the work and only some pre-selected zones have been announced by the Ministry. This delay of this procedure has not been appreciated by the investors.

Again in November 2011 the feed in tariff was reset, this time to 108.3 Euro/MWh. This change also allowed for the opportunity to have 30% increase tariff if the RAE and the Ministry deemed it necessary.

Presentation of the existing and the expected situation

In the previous years 3 5 applications for installing offshore wind farms, with a total capacity of 5.8GW, in different parts of the sea surrounding Greece have been made to the Regulatory Agency of Energy (RAE) and Ministry of Development. Of this total capacity 4.3GW are still under evaluation.

Moreover, applications for 2 projects of 700MW are recalled/rejected and 156MW are in abeyance. Also, there is overlap with some of the applications made. In areas such as the Thracian Sea, Limnos, Ag. Efstratios and Corfu – Diapontioi Nisoi islands, some companies have applied for zones that are overlapping each other, so the final licensed capacity will in the end, if and when granted, be less.

Two projects, with a total capacity of 714MW, have already received the Generation Licenses from RAE. The first is the 216MW Thracian Sea offshore wind farm, to be located in the area South and South East of the city of Alexandroupolis. It is developed by the company Thrakiki Aioliki 1, a Copelouzos Group company, and will see seventy-two 3.0MW turbines. A license was also granted in June to CITY ELECTRIC S.A., a 100% subsidiary company of holding company RF ENERGY S.A, to develop an 498.5MW offshore wind farm in the Limnos Sea Area in the North Aegean Sea. This wind farm will have eighty-one 6.15MW turbines.

There are various obstacles unique to Greece. These include problems caused by the geography of the country, such as the steeply descending shelves around the islands and mainland, and others that are unique to the Greek system and way of life such as the frequent and extreme changes in licensing, tariffs and regulation, some of which have been mentioned in this article.

Then there is the expected opposition coming from the local population, fishery, shipping and military and let’s not forget about the important tourist industry which would certainly oppose any industry that would affect the stunning views.

There are several research institutes involved with offshore wind energy in Greece. The main ones being the Centre of Renewable Energy Sources and Saving, the Hellenic Centre for Marine Research, the National Technical University of Athens (NTUA) and the Aegean University. Some of these are also involved in a special set up and approved offshore project, the ‘Creation of a National Programme for the Development of Offshore Aegean Wind Resource’ together with industry businesses that also have an interest in offshore wind. The project is now running.

However there have been success stories. For example there is a floating wind turbine installed close to the small island of Iraklias in the Cyclades islands. The turbine powers the world’s first wind powered desalination system. The plant produces 70m3 of fresh water per day, sufficient for the 250 people on the island. This pilot desalination plant called, Idriada, has been designed by the Aegean University scientific staff and was constructed at Elefsina Shipyards. It has been operating satisfactorily since 2007 and three more units were planned for placing on similar island locations.

Thanks to Konstantinos Gkarakis, Energy Engineer MSc at KG Engineering 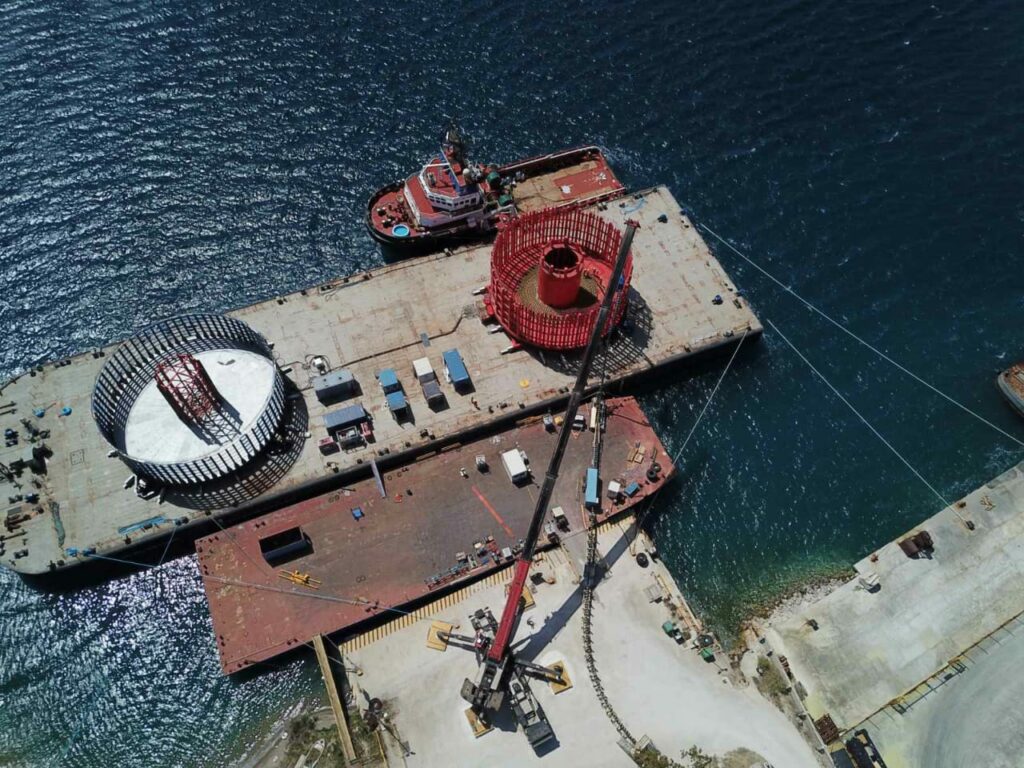