In the offshore windfarm support scenario it is becoming increasingly clear that the seakeeping ability of the current medley of workboats is not up to the job when the going gets rough.

This is exacerbated by current and future windfarms that are being positioned further out to sea in more onerous seastates. There is the need to get out there in short time (i.e. fast) in rough water especially in harsh winter conditions and to be steady enough against the tower to be able to get the technicians safely across. Downtime becomes a real issue for the operators.

Whatever claims are made by the builders/operators for the seakeeping of the current range of catamarans for wind farm servicing there is little doubt that these small craft 15m to 25 m long have limitations when it comes to meeting head seas in particular. Speeds of 25 knots are mentioned. Significant wave heights of 2m are also mentioned. But the reality is that the two numbers don’t go together. A considerable reduction of speed is enforced by the violent motion in even 1m seas. This is a problem that has plagued the researchers and designers of small fast craft for over a century- that of combining speed and seakeeping

So, imagine doing 25 knots in 2m significant wave height head seas in such a small boat at full power, in comfort and in safety! Impossible in reality in the existing size range 15m – 25m windfarm vessels. Yet the Ad Hoc 24m FastSwath design can do all this with superior comfort levels for the technicians and crew onboard. The loss of speed as wave height increases is very low compared to a catamaran as are the motions (accelerations). This FastSwath design will also be remarkably dry. Ride control is passive in the standard design but active ride control is an option.

Against the wind tower the FastSwath will push in the conventional way. The difference is that the up and down force on the fender resulting from the passing waves is one quarter of the force that a catamaran imposes. Consequently you don’t need to push nearly so heavily to maintain contact and make the bow fender stick.

Why is this design so much faster than other SWATHs? It’s a combination of the high length to displacement ratio hull form and an extraordinarily high propulsive coefficient. The propellers are large and the wake flow into them very energy efficient.

With speeds that are comparable to existing 25m catamarans yet with remarkable seakeeping, it is the ultimate rough weather WFSV.

The design is based upon 20 years of experienced gained from previous SWATH designs already plying the waters around the world, including the worlds fastest SWATH MV Sunflower II (Previously MV Patria) at 31knots, 2 SWATHs for the UK MoD and also the production naval architecture of the Lockheed Martin SLICE. A smaller slower variant is currently in production at a shipyard in Asia. 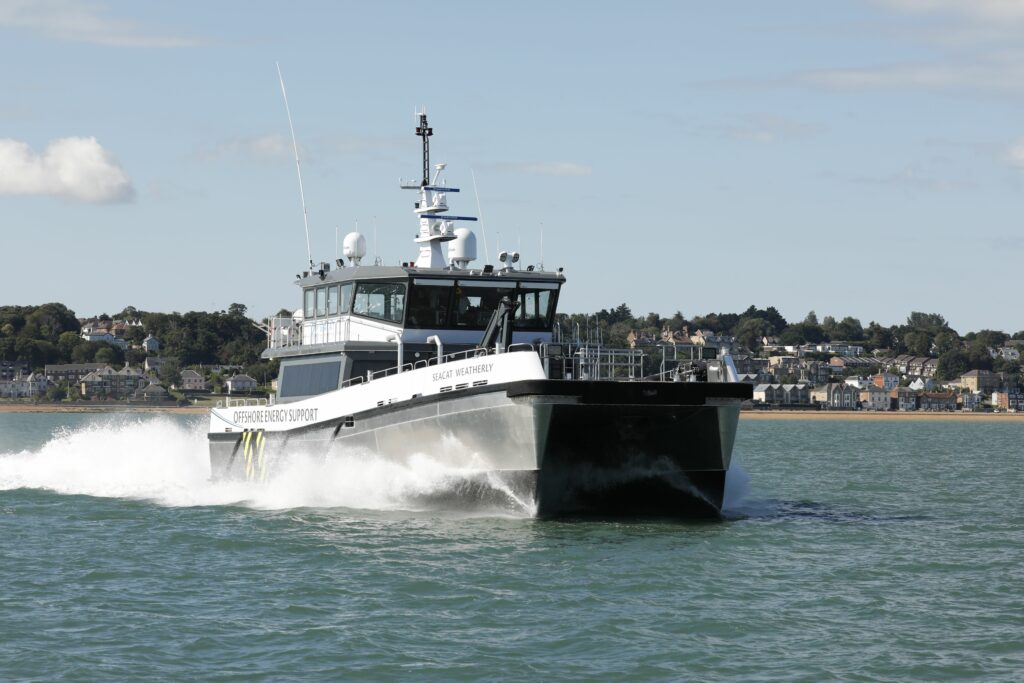