Atlantis Tidal Turbine to be Built in Province (USA)

Nova Scotia’s bid to become a North American leader in the development, supply and support of tidal energy projects took another step forward today with the announcement that an international consortium will test one of the world’s largest tidal turbines in the Bay of Fundy’s aggressive marine environment.

Atlantis Resources Corporation, a world-leading tidal technology and project development company, was one of five respondents to a request for proposal issued by the province last fall for a fourth berth-holder to participate in its Fundy Ocean Research Center for Energy (FORCE) project.

The company will work in partnership with Lockheed Martin and Irving Shipbuilding to customize, build, deploy and monitor their one megawatt AK-1000 Mark II turbine at FORCE’s Minas Passage test site.

“I am thrilled to welcome Atlantis, Lockheed Martin and Irving Shipbuilding to the FORCE project team,” said Premier Darrell Dexter. “Together, we are working to harness some of the most powerful tides in the world to produce safe, clean, renewable energy for Nova Scotia and through that process develop the expertise, experience and infrastructure to be a resource for tidal energy projects across North America.”

The project will involve more than fifty per cent local content. Lockheed Martin, which has 130 full time employees in Nova Scotia, will be responsible for engineering design elements, production drawings and procurement of major turbine components along with systems testing.

Irving Shipbuilding, with more than 1200 shipyard workers in the province, will oversee construction of the turbine base and assembly of the device in conjunction with other local suppliers.

“The momentum for tidal energy from Nova Scotia continues to grow,” said Premier Dexter. “We are taking on the challenge of building an industry from the water up, in a uniquely Nova Scotian way by using collaboration and innovation to attract the attention of the world, create good jobs and grow the economy.”

Deployment of the Atlantis turbine is planned for summer 2012.

“We are absolutely delighted that the Nova Scotia government has chosen our consortium to develop the final FORCE berth,” said Tim Cornelius, chief executive officer of Atlantis Resources Corporation.

“We are committed to working with local Nova Scotian companies to establish a local supply chain and knowledge base that will be a platform for the growth of a commercial scale marine power industry in the province. Building on our global project experience, we are keen to work with government and the other developers at the FORCE facility to accelerate the deployment of commercial scale marine energy in Nova Scotia.”

“The success of this consortium not only demonstrates Nova Scotia’s growing expertise in a promising industry, but also the breadth of the skills and capabilities of the men and women of Irving Shipbuilding,” said Steve Durrell, president, Irving Shipbuilding.

“The many years of steel fitting, welding and iron work expertise that our workforce proudly employs on military and commercial ships, offshore rigs, and other projects will now contribute to clean, renewable energy.”

FORCE is scheduled to install four subsea transmission cables to connect the test turbines to the electrical grid in the summer, giving Nova Scotia the largest in-stream tidal power capacity in the world.

The provincial government passed regulations last fall that will encourage the development of commercial, transmission-connected tidal arrays through the establishment of a feed-in tariff or guaranteed price, for electricity sold to the Nova Scotia grid. 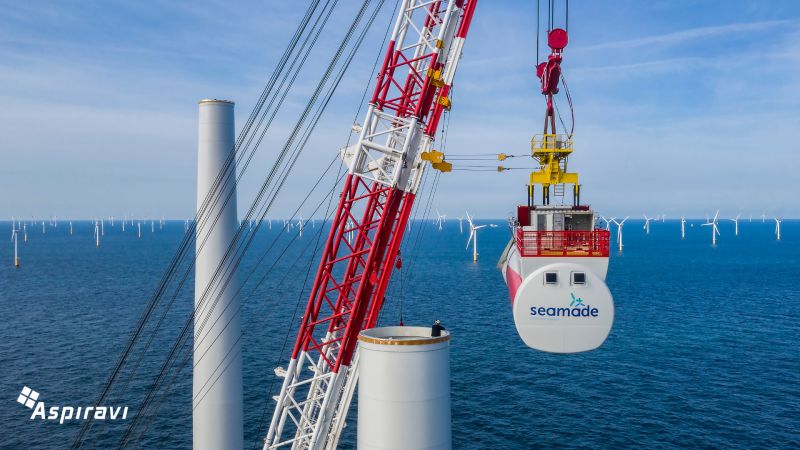