The first hydrogen bunkering license in the Netherlands has been granted within the port of IJmuiden, allowing Windcat Workboats to bunker the Hydrocat 48 crew transfer vessel with hydrogen in that port, Amsterdam IJmuiden Offshore Ports (AYOP) said.

”This license represents a major step in the possibility to use hydrogen as a fuel for vessels and increasing the sustainability of the sector,” said Willem van der Wel, managing director of Windcat Workboats.

”As bunkering hydrogen for shipping is a new development, the licensing process was quite complex. With the first license now approved we expect the use of hydrogen as a green fuel to accelerate.”

The Hydrocat 48 is used to transport crew to and from offshore wind farms for construction and maintenance activities.

The vessel sails from Ijmuiden, where the pilot for bunkering hydrogen in the port of IJmondhaven went smoothly, AYOP said.

Now the vessel’s normal operational activities – the maintenance of 44 Vestas turbines for Belgian wind farm Norther – will be based out of the port of Oostende. Windcat Workboats aims to take more hydrogen-powered vessels into use in the future.

Hydrocat 48 entered service in May.

Based on Windcat MK 3.5 design, Hydrocat 48 features dual-fuel engines supplied by MAN Engines that are retrofitted by CMB.TECH with a hydrogen injection system.

Windcat Workboats and CMB.TECH, the parent company, said they are working to optimise the technology to be able to eventually use a mono-fuel option via an internal combustion engine (ICE).

Windcat Workboats, together with its joint venture partners TSM and FRS, has three more vessels under construction that can be delivered with the hydrogen technology on board. 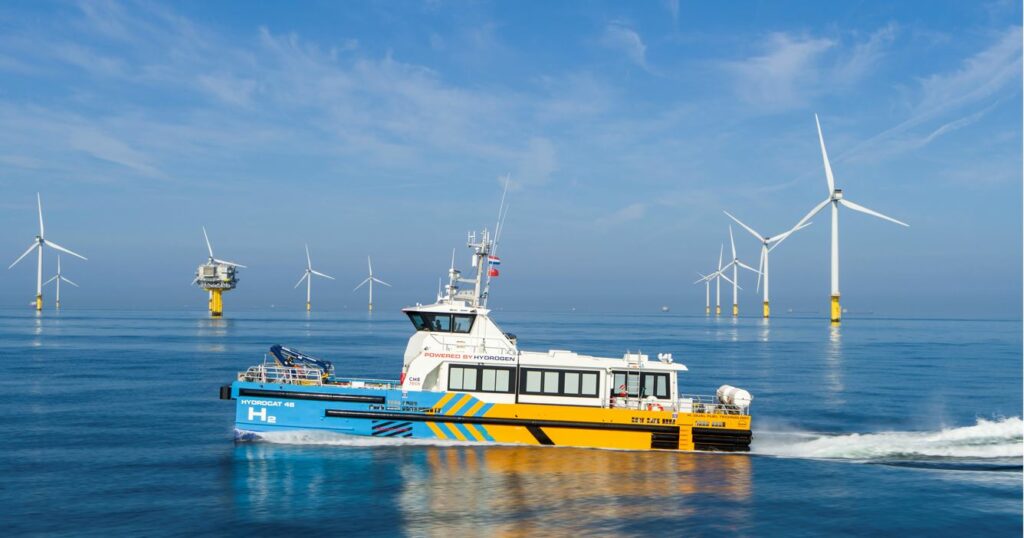