CMB.TECH, together with the Netherlands-based Windcat Workboats, has unveiled what the company describes as the world’s first hydrogen-powered crew transfer vessel (CTV).

The vessel, named Hydrocat 48, is ready for immediate operation after the successful completion of sea trials and bunkering.

“This ground-breaking development for both the marine and offshore wind industries is the first CTV that uses clean fuels to reduce up to 80% of its traditional fuel usage and associated emissions,” CMB.TECH said.

Based on Windcat MK 3.5 design, Hydrocat 48 features dual-fuel engines supplied by MAN Engines that are retrofitted by CMB.TECH with a hydrogen injection system.

The introduction of the dual-fuel CTV follows the earlier development by the UK-based company of a hydrogen-powered passenger shuttle.

“This vessel offers the industry a cost-effective solution to significantly reduce emissions from service vessels, which can be applied to any wind farm today. This solution can be seen as a steppingstone to fully hydrogen powered CTVs. By starting with dual fuel combustion engines, we can make hydrogen technology operational in the industry and kick-start further development of the technology, regulation, supply chain, etc.,” said Willem Van Der Wel, Managing Director of Windcat Workboats.

Windcat Workboats and CMB.TECH said they are working to optimise the technology to be able to eventually use a mono-fuel option via an internal combustion engine (ICE).

“The suitability of this technology for a CTV is mainly because existing diesel engines can be used. No fundamental changes to the main engine are required, which not only means that maintenance and repair remain simple, but also that the engine can easily be switched back to diesel fuel without any modifications,” said Roy Campe, CTO of CMB.TECH.

Windcat Workboats, together with its joint venture partners TSM and FRS, has three more vessels under construction that can be delivered with the hydrogen technology on board. 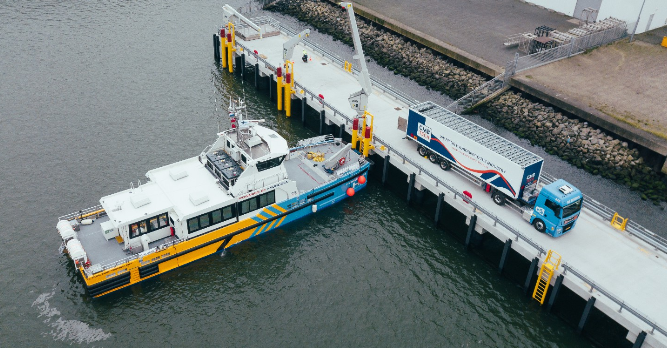