A new research from the University of Delaware found that new offshore wind farms off the US East Coast will not cause changes to the surface weather in coastal areas and this is primarily thanks to bigger wind turbines.

The study, which looked at potential changes in surface temperature and wind speed, was performed taking into account wind turbines with a rotor diametre and hub height exceeding 220 and 120 metres, respectively, and with rated power exceeding 10 MW.

This is because offshore wind farms to built off the US coasts are going to feature large turbines and previous studies, which have shown that surface warming can be associated with wind farms, considered smaller turbines.

Now, with the research based on using taller turbines that are going to be used in future wind farms, the result was reversed.

“We learned that the height of the turbine plays an important role”, said Maryam Golbazi, the lead author of the paper, who received her doctoral degree from University of Delaware in ocean engineering in 2022. “Because turbines are going to be taller in the future, we need to study how the future extreme-scale turbines are changing the meteorological factors at the surface”.

The study now showed that during the summer months, the effects on temperature were negligible and that there is even a slight cooling at the surface.

“We see cooling at the surface in the summertime”, Golbazi said. “However, it’s very small. The cooling is in an order of about 0.05 degrees on average. This amount is negligible and imperceptible to humans.”

The research was done for summer meteorological conditions because temperature changes caused by wind farms appear to be the strongest during stable atmospheric conditions, and those conditions occur mostly during the summer. The study is based on simulations of the summer of 2018.

As for wind speed, the research found that, while it does decrease at the surface within the offshore wind farm areas, the reduction in wind speed does not reach the coastal area and would not impact the coastal community because the prevailing wind is blowing toward the ocean in the summer.

The results of the study are that overall, the wind turbines have an imperceptible effect for humans on the surface atmosphere, and slightly reduce wind speed, turbulence, friction velocity, and sensible heat fluxes.

“We found that the impacts are minimal, mainly because the wind turbines that will be used are very large and very tall, thus most effects — such as temperature or moisture changes — still happen below the rotor, but do not reach the surface of the water”, said Cristina Archer, director of the Center for Research in Wind (CReW) of the University of Delaware, who also worked on the research as Maryam Golbazi’s doctoral adviser.

Stefano Alessandrini, from the National Center for Atmospheric Research, also served as the co-author on the paper. 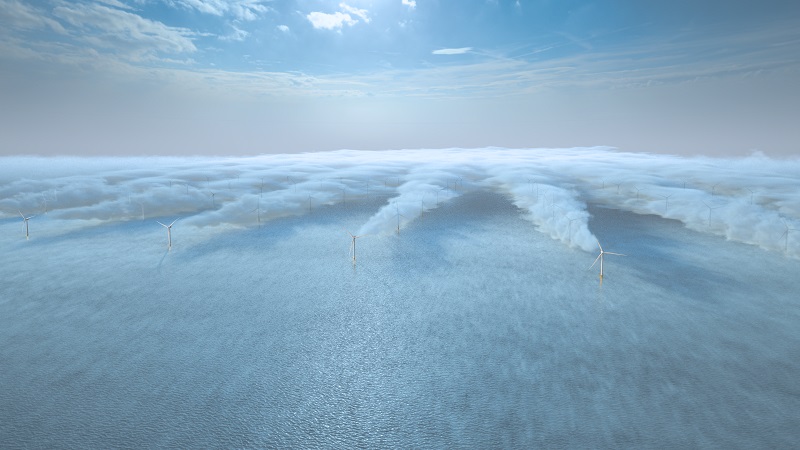