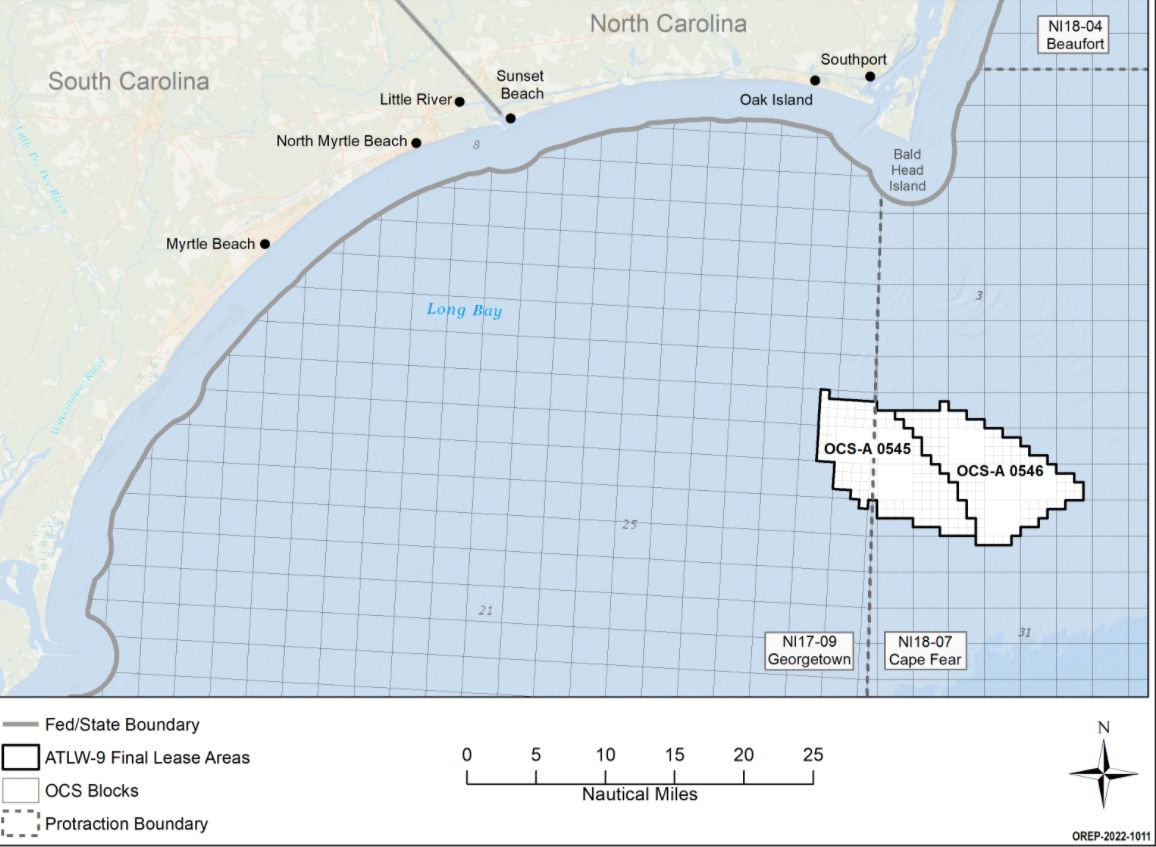 The Bureau of Ocean Energy Management (BOEM) has completed its environmental review and will hold a wind energy auction for two lease areas offshore North Carolina and South Carolina on 11 May.

The lease areas include 110,091 acres in the Carolina Long Bay.

If developed, they could result in at least 1.3 GW of offshore wind energy, enough to power nearly 500,000 homes, BOEM said.

The offshore wind energy auction will allow offshore wind developers to bid on one or both of the lease areas, OCS-A 0545 and OCS-A 0546, within the Wilmington East Wind Energy Area, as described in BOEM’s Final Sale Notice, which will publish in the Federal Register on 28 March.

The Wilmington East Wind Energy Area begins about 15 nautical miles from Bald Head Island at its closest point and extends approximately 18 nautical miles in the southeast direction at its widest point.

”The Biden-Harris administration is committed to supporting a robust clean energy economy, and the upcoming Carolina Long Bay offshore wind energy auction provides yet another excellent opportunity to strengthen the clean energy industry while creating good-paying union jobs,” said the US Department of the Interior (DOI) Secretary Deb Haaland.

”This is an historic time for domestic offshore wind energy development. We will continue using every tool in our toolbox to tackle the climate crisis, reduce our emissions to reach the President’s bold goals, and advance environmental justice.”

Among the stipulations, BOEM will offer a 20 per cent credit to bidders if they commit to invest in programs that will advance US offshore wind energy workforce training or supply chain development.

To advance BOEM’s communication and environmental justice goals, the leases will also require lessees to identify Tribal Nations, underserved communities, agencies, ocean users, and other interested stakeholders, and report on their communication and engagement activities with these parties.

These stipulations are intended to promote offshore wind energy development in a way that coexists with other ocean uses and protects the ocean environment, while also facilitating our nation’s energy future for generations to come. The stipulations were embraced in the Department’s recent lease sale for the New York Bight, which set a record as the nation’s highest-grossing competitive offshore energy lease sale in history, including oil and gas lease sales.

”BOEM is focused on ensuring that any development offshore North Carolina is done responsibly, in a way that avoids or minimizes potential impacts to the ocean and ocean users in the region,” said BOEM Director Amanda Lefton.

”The milestones announced today mark significant progress in achieving this Administration’s goal for deploying 30 gigawatts of offshore wind energy by 2030, while creating jobs and strengthening a sustainable domestic supply chain.”

This will be the second auction for wind acreage offshore North Carolina, following the auction for the 2.5 GW Kitty Hawk area held back in 2017 and won by Avangrid, a subsidiary of Iberdrola.

BOEM will hold an online mock auction for potential bidders starting at 9:00 a.m. Eastern Daylight Time (EDT) on 6 May. The monetary auction will be held online and will begin at 9:00 a.m. EDT on 11 May.

Last year, BOEM unveiled a new leasing path forward, which identified up to seven potential lease sales by 2025, including the upcoming Carolina Long Bay lease sale and last month’s New York Bight lease sale. Lease sales offshore California and Oregon, as well as in the Central Atlantic, Gulf of Maine, and the Gulf of Mexico are expected to follow.