Charybdis, which is expected to be sea-ready by late 2023, will first be deployed out of New London harbor in Connecticut to support the construction of Revolution Wind and Sunrise Wind, both under joint development by Ørsted and Eversource.

“This investment will enable us to unlock the economic benefits of offshore wind, not just for the Northeast, but for the Southern states as well. We’re proud to partner with Dominion Energy and Eversource on this historic milestone.”

The charter’s terms will allow the vessel, subject to state regulatory approval, to support construction of Dominion Energy’s 2.6 GW Coastal Virginia Offshore Wind (CVOW) project off the coast of Virginia Beach, which is expected, consistent with prior guidance, to be completed in 2026.

Dominion Energy is leading a consortium of naval engineering and fabrication firms to build Charybdis, which will be fully utilized in support of the installation of offshore wind generation off the US East Coast, the company said.

At peak construction, 1,000 US workers will be employed on this project. Once complete, the vessel will be homeported in Hampton Roads, Virginia, and utilize an American crew.

The vessel’s hull and infrastructure will be fabricated with more than 14,000 tons of domestic steel, with nearly 10,000 tons sourced from Alabama, West Virginia, and North Carolina suppliers, Dominion said. The vessel is designed to handle current turbine technologies as well as next generation turbine sizes of 12 MW or larger. It will also be capable of the installation of foundations for turbines.

“We look forward to working with Ørsted and Eversource on the construction of Revolution Wind and Sunrise Wind to continue to grow the offshore wind industry in the U.S.”

Ørsted and Eversource have also committed nearly USD 100 million to a public-private partnership with the State of Connecticut and Connecticut Port Authority to revitalize the currently underutilized port facility at the State Pier in New London. Approximately 460 construction jobs will be created for the redevelopment of State Pier along with another 100 permanent positions.

The redevelopment project at State Pier is estimated to add millions of dollars in value to the New London economy. In addition, the City of New London and Ørsted-Eversource executed a 10-year host community agreement that brings a guaranteed USD 5.25 million in new revenue to the city.

“This new, state-of-the-art American-made wind turbine installation vessel is a major milestone for the offshore wind industry at both the local and national level,” said Joe Nolan, President and Chief Executive Officer of Eversource Energy.

“As offshore wind continues to grow in Connecticut and throughout the U.S., we are seeing the birth of a new, domestic supply chain that will create thousands of jobs across the country for decades to come. We are proud to partner with Dominion Energy as the first-ever users of this new world-class vessel and bring it to New London to support our work at State Pier and deliver local jobs and economic investment.” 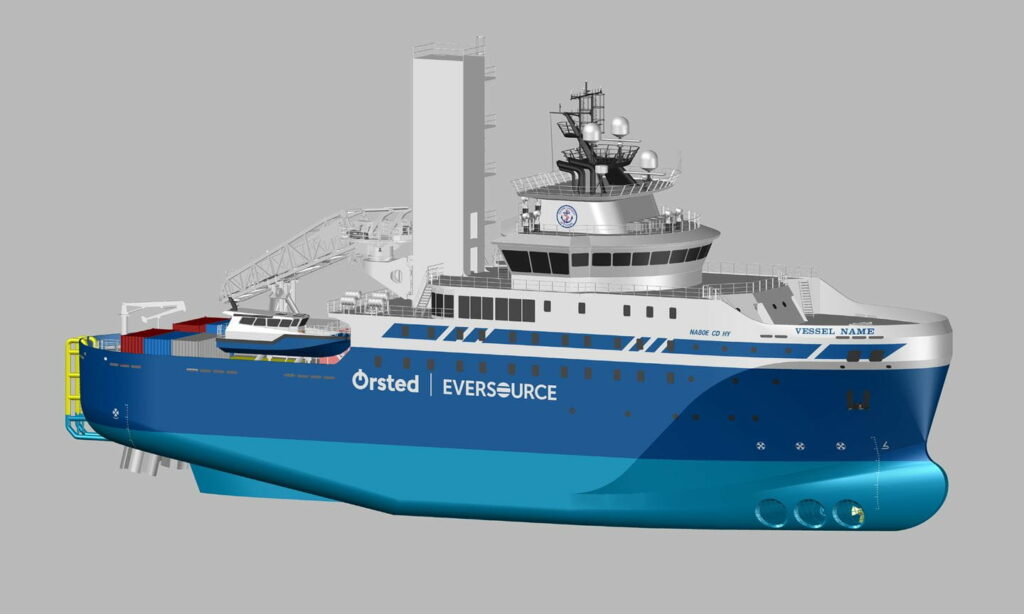