Van Oord, as part of the Two Towers consortium, is preparing to install eight reef structures with oysters underwater at the Borssele V offshore wind site in the Dutch sector of the North Sea.

The project aims to investigate methods for the development of oyster reefs at offshore locations as part of a research programme relating to the restoration of European flat oyster beds, and will use an eco-friendly scour protection called Ecoscour.

Specifically, the project will test different outplacement methods for live European flat oysters on the two scour protections of Borssele Site V by installing eight different structures offshore to determine which method works best for the long-term establishment of oyster reefs on scour protections. On the structures, oysters will be placed in various ways such as contained, loose and pre-settled.

“Additionally, the research team wants to gain knowledge about what the most effective life stage of a European flat oyster is for installation on the scour protection: for instance adult oysters or juvenile oysters / spat or a combination of both. By means of our Ecoscour research programme and the installation of these eight new reef structures offshore, the team aims to learn a great deal about developing oyster reefs in the North Sea on a large scale”, Van Oord said.

On the Ecoscour project, Van Oord is working together with Wageningen Marine Research, HZ University of Applied Sciences, Bureau Waardenburg and the Netherlands Institute for Sea Research.

Borssele V, located some 20 kilometres off the Dutch coast, consists of two MHI Vestas 9.5 MW wind turbines and is designated as an innovation site within the Borssele Wind Farm Zone.

The Two Towers consortium, consisting of Van Oord, Investri Offshore, and Green Giraffe, won the tender for the development of the site in April 2018.

Along with the Ecoscour programme, the Borssele V site is also introducing various advanced technologies for demonstration and commercial application in future offshore wind farms. 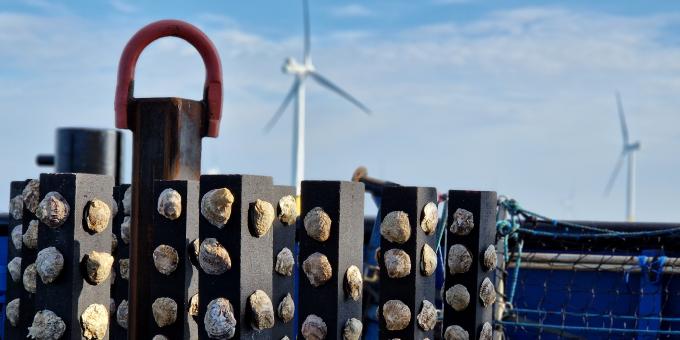