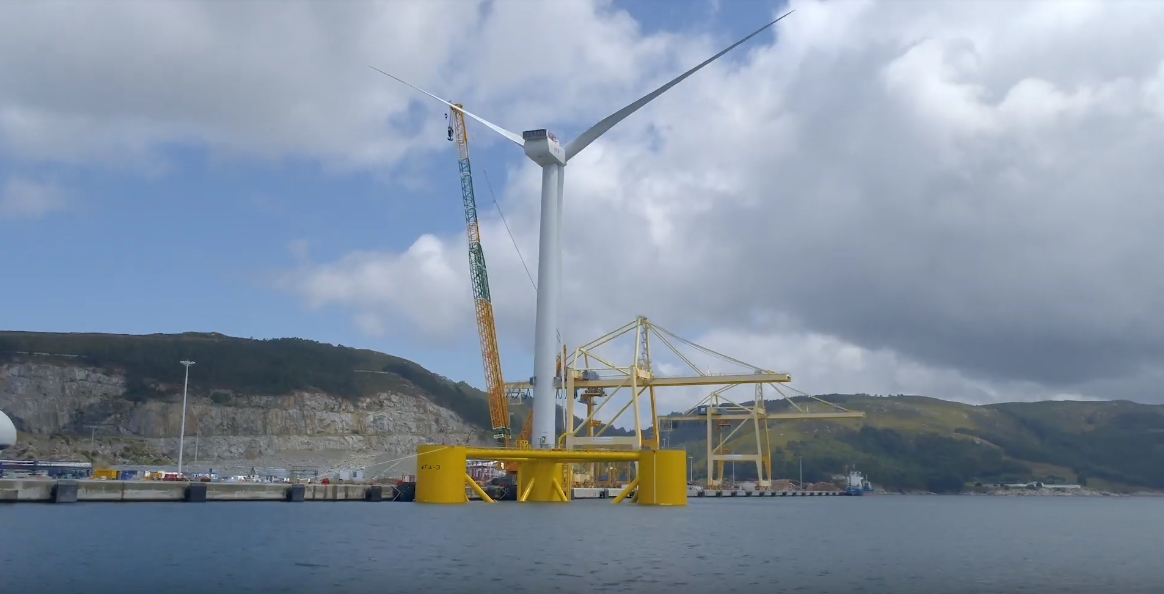 The first WindFloat Atlantic platform with the turbine fully installed has set off from the Spanish Port of Ferrol towards its final destination 20 kilometres off the coast of Viana do Castelo in Portugal.

Once at the final location, the three floating structures –stretching 30 metres in height and with a distance between each one of their columns of 50 metres – will be installed to form the first floating wind farm in continental Europe.

The structure that has set off from the outer harbour of Ferrol comprises a floating platform and an MHI Vestas 8.4MW wind turbine, the largest installed on a surface of these characteristics to date. In the coming months, two other platforms will be added to complete the wind farm which, with its 25MW installed capacity, will be able to generate enough energy to supply the equivalent of 60,000 users each year.

The project is led by the Windplus consortium, comprising EDP Renewables (54.4%), Engie (25%), Repsol (19.4%), and Principle Power Inc. (1.2%). The facility has three wind turbines mounted on floating platforms which are anchored only with chains to the seabed at a depth of 100 metres.

The WindFloat Atlantic project builds on the success of the WindFloat1 prototype, which was in operations between 2011 and 2016. The 2MW prototype successfully generated energy uninterruptedly over five years, surviving extreme weather conditions, including waves up to 17 metres tall and 60-knot winds, completely unscathed, the consortium said.

The transport alone of the first of the three floating structures making up the floating wind farm at Viana do Castelo marks a milestone in itself, as it sidesteps the need for towing craft designed specifically for this process. This benefit, alongside the simple mooring process, make it possible to replicate this initiative in other geographical areas and facilitates the commissioning phase regardless of geographical boundaries, according to the consortium.

The floating platforms have been built in cooperation between the two countries on the Iberian peninsula: two of the platforms were manufactured at the Setúbal shipyards in Portugal, and the third at Avilés and Ferrol shipyards in Spain.

”This initiative has had the support of public and private institutions, encouraging companies that are leaders in their respective markets to take part in the project; while the Government of Portugal, the European Commission and the European Investment Bank have provided financial support. The partners that have made this project possible include Principle Power, the joint venture between Navantia/Windar, the A- Silva Matos Group, Bourbon, the wind turbine supplier MHI Vestas and dynamic cable supplier JDR Cables,” the consortium said.