The first metres of the cable have been laid on the seabed in Vollesfjord in Vest-Agder, the Norwegian TSO said.

NordLink is a joint project between Statnett and Germany’s DC Nordseekabel GmbH, a 50:50 joint venture between TenneT TSO and KfW.

The entire interconnector is 623 kilometres in length, and 516 kilometres will be installed as a subsea cable.

“The first part of the cable will be installed this summer, 124 kilometres from Vollesfjord and to the Danish sector of the North Sea,” said Stattnet’s Executive Vice President Håkon Borgen.

“We have been working on this project for several years, and it is very exciting to get started on the actual cable installation. The cable is now pulled in to shore through a microtunnel from the head of the fjord, and the cable laying vessel is starting its journey towards open sea.”

The cable weighs approximately 50 kilograms per metre and is being installed by the Nexans Skagerrak cable installation ship. Following the laying operation, the offshore vessel Polar King will bury the cable in the seabed approximately one metre depending on the seabed conditions. The cable was produced by Nexans in Halden, Norway.

“Extensive wind power infrastructure has been developed in Northern Germany. This cable will enable an interaction between Norwegian hydropower and German wind and solar power. When the sun shines and wind blows, this can create a power surplus in Germany, and we can buy power for a reasonable price. When the wind is calm and sun doesn’t shine, this might cause a demand in Germany, and they can get hydropower from us,” said Borgen.

NordLink consists of two cables, the second of which will be installed next summer in parallel to the first cable currently being installed.

The cable installation in Germany will start next year, according to Bergen.  The cable will start in Wilster in Schleswig Holstein, northwest of Hamburg.

The EUR 2 billion project is scheduled for commissioning in 2019 and for commercial operation in 2020. 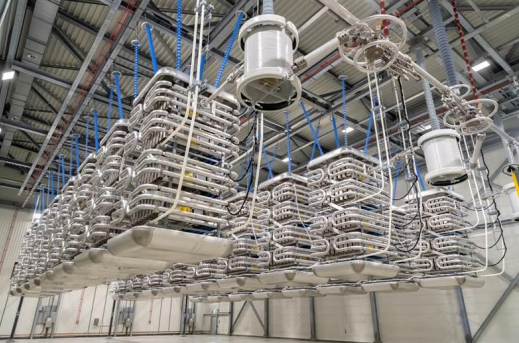