40 per cent of the turbine foundations are now in place at the 659MW Walney Extension offshore wind farm, DONG Energy said.

Taking shape 19 kilometres off the Cumbrian coast, the Walney Extension wind farm will, on completion in 2019, be able to meet the electricity needs of over half a million UK homes.

When fully commissioned, it will leapfrog the 630MW London Array to become the world’s largest offshore wind farm.

“We remain on our original construction schedule with both offshore substations in place and 40 per cent of the foundations for wind turbines installed,” said DONG Energy’s Walney Extension programme director Andrew Cotterell.

The two massive offshore substations which will gather power generated by each wind turbine were installed in April 2017.

Each of the substations comprises of a jacket supporting frame weighing up to 1,500 tonnes and a topside, containing the transformer equipment, weighing around 2,500 tonnes. Installation was handled by the heavy lift vessel Oleg Strashnov.

Turbine components and foundations are being stored in Belfast and the construction is coordinated from the port of Barrow in Furness which already hosts the operating and maintenance teams for three other DONG Energy offshore wind farms, Barrow, Walney and West of Duddon Sands.

“We are proud to be building the wind farm from Barrow which has already become an established hub for this technology on the UK West coast,” said Cotterell. 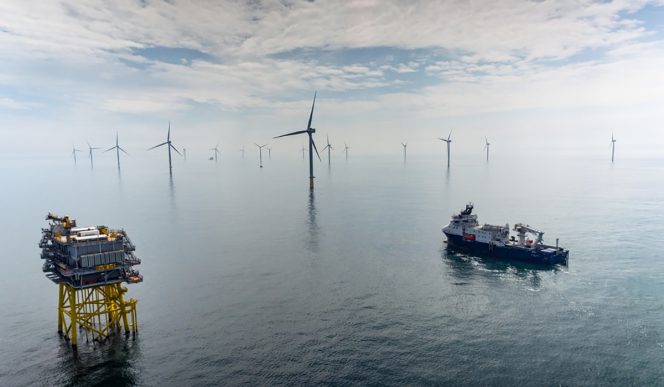