On a bright Sunday morning August 31st around 450 persons gathered in the Felison terminal of the DFDS Seaways in the port of IJmuiden where the Princess Seaways cruise liner was waiting to take them on a day trip to the Eneco Luchterduinen offshore wind farm, Dutch utility Eneco’s second offshore wind farm in Dutch waters which is currently being constructed 23 kilometres off the coast of Ijmuiden in North Holland.

All of them were invited on the cruise trip as part of Eneco’s strategy to create more awareness and involvement in offshore wind among the Dutch public.

Offshore WIND and other members of the press were also present. While we all waited in the cruise terminal for the sign to board we had a good view on the other visitors. One could see people of all ages, some of them alone and some with their whole family. During the trip we would discover that these people had come along for many different reasons; local residents that came out of curiosity to see, close to, what the wind farm would look like, some who have a profound interest in renewables, some with technical engineering interests, but also some who’s partner worked on a wind farm and who now finally had the chance actually to see what their partner has been or is doing on a day to day basis. And of course some of them were there to emphasise their opposition to offshore wind.

But whatever the reason, Eneco had brought all of them together to give them a chance to learn more about the topic of offshore wind development, to give them the opportunity to speak to members of the Eneco team that were present and, hopefully, succeed in creating a balanced understanding of this new form of energy generation. Eneco had launched a national campaign in the Netherlands by which people could win a day trip to the wind farms if they could provide the utility with a good reason why they should be selected to be on board. Of the 600 applicants, there were 450 lucky winners. And their luck on this voyage would be threefold as they would get a ‘get 3 for 1 special offer’ since we would also be passing the two wind farms that have been operational for years now, the Egmond aan Zee Windpark, since 2007, and Eneco’s first offshore wind farm Prinses Amaliawindpark, since 2008, on our way to reach the construction site of the Eneco Luchterduinen wind farm.

It is apparent that there is a need for more public involvement. There is still a lot of ignorance among the public on both the positive and negative sides of the argument. Primarily the industry it is new, and the unknown is often regarded initially with some kind of suspicion. One might argue whether in the past the industry players have made enough efforts to inform the public. The reality in the Netherlands is that only two wind farms have been built since the start of the industry. Everything was new for everyone, and there was a steep learning curve ahead. So, while these industry players were occupied in finding and establishing their role in this new energy market, they had been, in the absence of a stable long-term political commitment, directing their attention more at international projects. As a result of this the public has learned about this industry mainly from occasional news coverage in national and local papers.

And what they read was mainly highlighting the ‘superficial’ negative sides of offshore wind; being too expensive, too much reliant on state subsidies, and too unpredictable. Although the fact is that offshore wind is still more expensive than conventional energies or, for that matter, other renewable energies, one should not forget to highlight that these projects create many jobs, provide a quicker alternative to become less reliant on the oil and gas imports, often from politically unstable countries, and finally to provide an alternative to filling this small country with onshore turbines.

Horizon pollution was another argument against offshore wind that was heard on board this cruise. Some of the inhabitants of the coastal areas from which the Eneco Luchterduinen wind farm might be visible have the idea that this sight would result in ’empty hotel beds’ and would keep tourists away. Personally, I live in Den Haag, only a few minutes away from probably the most touristic Dutch beach at Scheveningen, from where I can see an oil platform, large oil tankers and other ships on the horizon regardless of the weather, all of which makes me wonder where these fears concerning offshore wind originate, who is responsible for promoting them and why?

The industry must stimulate any and every initiative to get more public involvement. The cruise trip is an example of Eneco organising face to face events with the public. Other initiatives are letting the public decide on the name of the wind farm to be built, which has been the case for the Eneco Luchterduinen wind farm, and enabling the public to ‘buy’ their own piece of wind farm. This is already available for onshore wind in the form of the ‘Dutch Wind Certificates’. Offshore WIND spoke to one of the public guests who has ‘adopted’ a wind turbine and is now actively keeping an eye on its performance. He had joined the cruise trip to see what the ‘big brothers’ would look like. The company is looking also at creating something similar for offshore wind in the future. In the case of the Eneco Luchterduinen wind farm the company has also made €45,000 of funding available for local sustainable initiatives each year for a period of 20 years, the life span of the wind farm.

While the cruise liner slowly left the port of IJmuiden and the public guests were finding the best viewing position for themselves, inside, or on one of the decks outside, Eneco held a presentation for the press on the company’s history in wind energy and its future strategy.

Eneco has been active in wind for 25 years since they installed the first turbine on the Maasvlakte near Rotterdam. At the moment their portfolio consists of 650MW generated by 250 turbines, of which 60 are in the Prinses Amaliawindpark offshore wind farm, with another 50 to 70 turbines to be added to their portfolio in the near future. Sustainability has not only been at the heart of the company’s internal philosophy for 7 years but it is a strategic part of the business plan with their commercial and personal consumer clients. Their slogan is ‘Sustainable energy for everyone’, and currently the company has around 150,000 ‘wind’ customers.

The utility’s first offshore wind farm, Prinses Amaliawindpark, which has been in operation since 2008 has proven to have an almost perfect rating with 98% availability. Of the 2% that was not available, half of it, 1% of the total was planned maintenance downtime. The wind farm has 60 Vestas 2MW turbines producing electricity for around 130,000 households annually.

For their second offshore wind farm, Eneco Luchterduinen, the company has partnered with Japanese Mitsubishi Corporation.

It will have 43 Vestas 3MW turbines installed. Van Oord is the main EPC contractor in this project. Eneco Luchterduinen is one of the first wind farms to use a design that includes the transition piece being completely integrated with the monopile itself, thereby decreasing installation time. Eneco is also participating in a monitoring and evaluation program to research the effects of the wind farm on the environment. When the wind farm is in full operation, expected late 2015, it will power 150,000 Dutch households annually.

The company also revealed some information on their planned future wind farm in the zone Q4. Q4 is part of the 9 development zones that were consented back in 2009. It would become twice as large as the two offshore wind farms by Eneco combined but, due to the choice of larger, multi megawatt turbines, it would have fewer turbines installed than at Eneco Luchterduinen.

The first offshore turbines were visible as soon as the presentation ended, and we joined the other wind farm visitors outside. In the distance a line of turbines filled the horizon showing part of the 36 turbines of the Offshore Windpark Egmond aan Zee which has been operational since 2007. This wind farm is a project by Shell and Nuon. Not that much later we also saw the first turbines of the Prinses Amaliawindpark. From a distance of 500 meters we could all have a perfect view of the turbines and the offshore substation and some of the Windcat Workboats support vessels cruising through the wind farm.

At one point we could see in the distance Van Oord’s new offshore installation vessel Aeolus installing foundations at the site with Van Oord’s multi-purpose support vessel HAM 602 at its side. At that time it had completed the 10th installation, working at a rate of one foundation installation per day. The Aeolus can carry 4 piles at the time on board. A few weeks after our cruise a start will be made on the export cable. The offshore substation is scheduled to be installed in March next year, followed by the installation of the 43 turbines in April. These will be transported by the Aeolus from Denmark to the construction site, carrying 6 to 7 turbines at the time which are expected to be installed at a rate of one turbine per day. Throughout the trip all visitors were kept fully informed about the projects through speakers and by the Eneco team members present.

On our way back we had the chance to see the other two wind farms again and enjoy the last rays of sun, and just as we disembarked from the cruise liner it started to rain. Was this change in the weather an indication of changes to come? Because little did Eneco know when they spoke about their Q4 plans that only one month later the plans for this wind farm could be thrown directly into the bin as a consequence of the new offshore wind strategy announced by the Dutch Government. In the new strategy they identified three large offshore wind development sites being at Borssele, off the coast of South Holland and a third off the coast of North Holland. However, these are to replace the ‘earlier’, ‘smaller’ wind farms that were consented in 2009, including Q4. 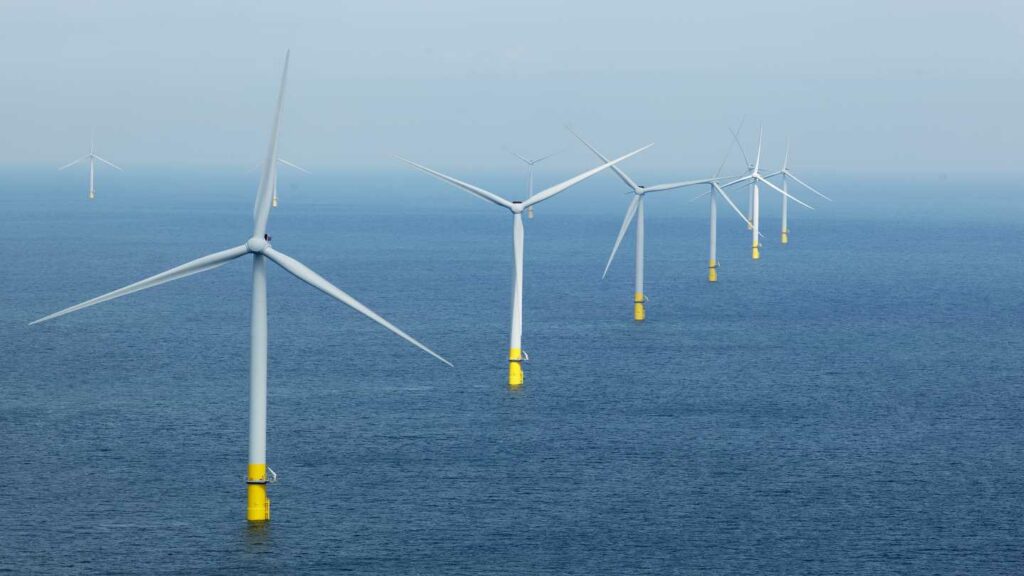