The Port of Ardersier today secured the full backing of the Scottish Government for plans to turn the former oil fabrication yard on the Moray Firth into a manufacturing ‘super-hub’ for offshore wind.

In what the port’s Chief Executive Officer Captain Steve Gobbi described as a ‘major milestone’, the 400 acre facility has been given the green light from the government and its regulators Marine Scotland and Transport Scotland.

The vacant site 15 miles east of Inverness now holds a marine licence and a harbour revision order, together with full planning consent from Highland Council secured earlier this year, paving the way for a potential jobs boom for the Highlands.

“This is a major milestone for the Port of Ardersier,” says Captain Gobbi. “There are few, if any, vacant sites of this scale in the northern North Sea offering deep water access and the potential to undertake manufacturing, assembly, operations, maintenance and decommissioning from a single location. We now have the all-clear to commence site works and undertake major dredging which will see the port open for business next year.

“We now have a compelling offering to offshore wind consortia, manufacturers, tier 1 suppliers and operations and maintenance contractors – and have been in discussion with a number of major firms which can benefit from this vast, dedicated and unrestricted site with superb access to major offshore wind zones.

“This area of Scotland has a tremendous skills base with a strong heritage in oil, gas and marine operations. If the port can secure a slice of the estimated £70-80 billion UK offshore wind construction market, this will be a very positive story indeed.

“I would like to commend Highland Council, Transport Scotland and Marine Scotland for their positive approach, and thank Highlands and Islands Enterprise which continues to support us in making our vision a reality,” Gobbi concluded.

The news follows the approval of £2.5 billion plans to build the Moray and Beatrice offshore wind farms in the outer Moray Firth, which together will be the world’s third largest offshore wind farm with up to 326 wind turbines. The Beatrice scheme has been awarded an early ‘contract for difference’ investment contract from the UK Department of Energy and Climate Change – securing a guaranteed long-term feed-in tariff for the 664 MW project.

Calum Davidson, Director of Energy at Highlands and Islands Enterprise said: “This is significant news for the Port of Ardersier. It was an iconic fabrication site in the heyday of the oil boom in the seventies and the eighties. By gaining full consent to develop as a renewables hub, it is further recognition of the significance of the available and flexible space at the Port of Ardersier to service this growing part of the energy sector. This also highlights the strength of the offering in terms of facilities in ports and harbours across the Highlands and Islands, with wide variety of possibilities for both the renewables and the oil and gas sectors.”

Hannah Smith, Policy Officer at Scottish Renewables, said: “The importance of properly-constructed, fit-for-purpose port and harbour facilities cannot be underestimated to ensure the success of Scotland’s offshore renewable energy sectors. We welcome the Port of Ardersier’s proactive approach, which is crucial to ensure the correct infrastructure is in place to create a strong Scottish supply chain – attracting manufacturers, benefiting local economies and creating jobs.”

This would be a second lease of life for the specialist port. Formerly the McDermott Fabrication Yard, it was built on land reclaimed from the foreshore in the 1970s for the fabrication and construction of North Sea oil and gas platforms. At its height, the yard employed 4500 people. 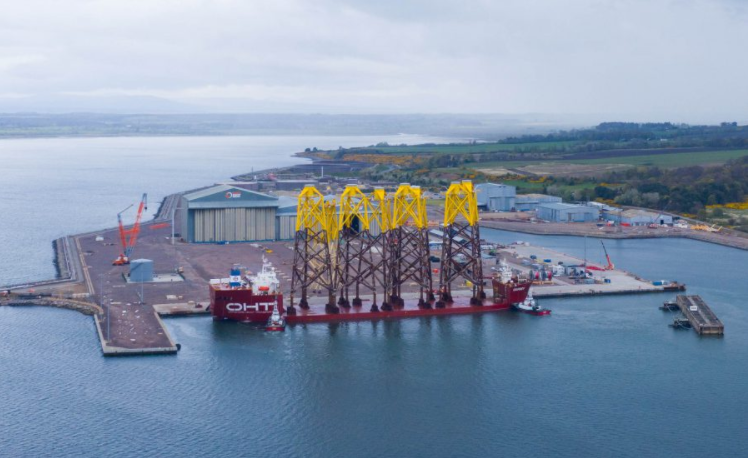