Siemens has installed the BorWin2 offshore platform in the North Sea northwest of the island of Borkum. This marks Siemens’ achievement of the second crucial milestone in the German grid connection projects under contract with the German-Dutch network operator TenneT.

Siemens had already erected its first converter platform for the HelWin1 connection off Heligoland in the North Sea in August 2013. The BorWin2 transmission capacity of 800 megawatts (MW) is enough to meet the power demand of some 800,000 German households. On the platforms, the alternating current generated by the wind turbines is transformed into low-loss direct current for transmission to the mainland by using Siemens technology.

The BorWin2 onshore converter station, likewise supplied to TenneT by Siemens, is located in Diele. There the electric power from the connected wind farms is converted back into the alternating current required to feed into the power grid.

“We are now in the final stretch to achieve commissioning in the first half of 2015, as promised. When the two platforms yet installed by us go on line, they will be able to supply more than 1.3 million households,” stated Karlheinz Springer, CEO of the Power Transmission Division within the Energy Sector of Siemens AG.

“We are set to make major progress in expanding our offshore capacity in the coming months, and that brings the German government’s offshore expansion targets within reach,” said Lex Hartman, member of TenneT management.

In mid-2010 the grid operator TenneT had placed the order for the BorWin2 offshore grid connection with a consortium comprising Siemens and the Italian cable specialist Prysmian. In all, Siemens is realizing five North Sea grid link-ups for TenneT: HelWin1 (576 MW) and HelWin2 (690 MW) off Heligoland, BorWin2 (800 MW) and BorWin3 (900MW) off Borkum, and SylWin1 (864 MW) off Sylt. The first four platforms HelWin1 and HelWin2, BorWin2 and SylWin1 are to commence commercial operation in rapid succession between the second half of 2014 and the first half of 2015.

In April 2014, Siemens won the order for the fifth grid connection in the North Sea, BorWin3, in a consortium with Petrofac. It is scheduled to go on line in 2019. Once commissioned, the grid connections installed by Siemens will have a total transmission capacity of over 3.8 gigawatts (GW). Thanks to Siemens’ efficient high-voltage direct current (HVDC) technology, transmission losses per link are less than three percent, not including cable losses.

The platform is equipped with a helipad and was built under contract to Siemens by Nordic Yards at its shipyard in Warnemünde. The shipyard has been contracted by Siemens to fabricate three HVDC platforms in all. The platform’s seven decks, spanning a total height of 25 meters, house not only all the technology and equipment required for high-voltage direct current (HVDC) transmission, but also living quarters.

Up to 100 employees at a time will be active on the platform for the next phase of the project in the North Sea. They will first re-open the doors and panels previously welded closed for transportation, and remove other transport safety fixtures and ballast weights. They will then commission the maritime systems such as the position lights and radio installations, and start up the air conditioning and water treatment systems. A self-propelled jack-up platform – a kind of mobile logistics and accommodation island – will provide on-site catering and living quarters for the crew.

The platforms are fully automated and, once commissioned, the systems can be monitored and controlled from land, with cameras and sensors providing a complete overview of the current operating status. Siemens has been contracted by TenneT for maintenance of the grid connection for an initial period of five years. 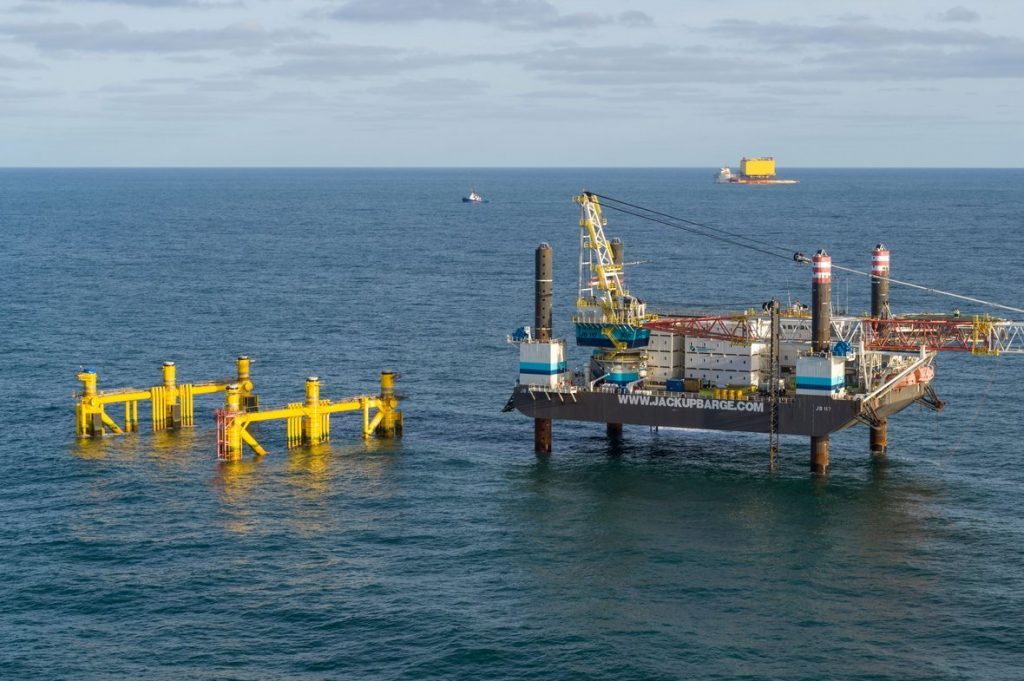