In April 2012 the French Government under President Sarkozy announced the results of the first round for offshore wind energy licences. Companies and consortia had been invited to tender for the licences following the terms and conditions set out by the Commission of Energy Regulation (CRE). The tenders were for a total maximum power of 3000MW, the equivalent of 2 nuclear power stations, which will provide the equivalent of the annual consumption of l*.5 million homes.

The areas selected for the tenders are spread over four zones on the North coast from Dieppe to Saint Malo and one zone on the West coast near to the mouth of the Loire river. The zones are Le Tréport, Fécamp, Courseulles-sur-Mer, Saint-Brieuc, and Saint-Nazaire.

The runners in this race to get the first round of offshore wind prizes were consortia made up of one of either of the two French power utility giants EDF and GDF Suez, and the Spanish
utility Iberdrola. EDF took the Danish offshore wind expert, DONG Energy, on board with French turbine manufacturer Alstom, wpd offshore and Nass & Wind Offshore as principal partners in Eolien Maritime France. Iberdrola joined up with the RES Group, through its French subsidiary, EOLE-RES, and turbine manufacturer AREVA to form la société Ailes Marines SAS. This group also included engineering and construction company, Technip, and developer neoen marine.

GDF Suez, through its subsidiary La Compagnie du Vent SAS, signed up with German turbine builder Siemens. Terms and Conditions The tendering companies and consortia were given the opportunity to bid for one or several zones. If they should attempt multiple zones then they should propose an offer for each zone “containing variations relating to its selection on other zones”.

This made the tenders quite complicated, but also opened the door for one or two French controlled consortia to take the majority of the five zones, a situation that the government in Paris would surely prefer. Unlike tenders for offshore wind energy licences in other countries the tender packages would have to be more comprehensive and include details of the equipment and material to be used, and also details of the planning permissions required for building and infrastructure on shore.

After the licences had been awarded the successful groups would have until October 2013 to work out the detailed feasibility of the project and until April 2014 to calculate the effect of their plans on the environment. A zone licence would be awarded to the consortium that had proven to the French government that their plans for the zone were not only superior
to those of the competition but also acceptable in three criteria:

On March 28, 2012 the CRE submitted their analysis of the bids received with various combinations of tenders and variants to the government. They added “all the bids are of good quality, with strong industrial proposals… however the price of the electricity to be exported from the wind farm had significant differences…and exceeded their pre-set ceiling in some cases.”

Eolien Maritime France had won 3 of the 4 licences awarded with almost 1.43GW; GDF and their alliance with Siemens had won nothing. The only tender received for Le Tréport had been from the GDF alliance. Gérard Mestrallet, the Chairman and Chief Executive Officer of GDF SUEZ, had pitched his export price too high, which, according to Eric Besson, would “have resulted in an indiscriminate increase in electricity bills.”

Eolien Maritime France also tendered the best bid for the Saint-Brieuc in the Côtes d’Armor zone, but with typical French aplomb the government awarded Spanish Iberdrola and Areva, who came second with their tender. This was done “to maximise the industrial benefits, creation of plants and jobs, which had been promised by each of the groups if accepted,” explained Eric Besson.

Finally, Mr Besson announced that the launch of the second tender required as part of the Grenelle Environment Forum, will be in the second half of 2012. This will include zones in Le Treport, again, and Noirmoutier plus others yet to be confirmed, possibly hinting that GDF SUEZ will soon be given a second chance. However this is now the responsibility of the new government, under President Hollande, elected in May.

According to a French government source responsible for the Energy Sector, Transport and Environment, the new government “has yet to make any comment on the licences,” which were initiated and completed, in the previous 5-year administration of President Sarkozy.

The major offshore wind operator, DONG Energy, is also part of this consortium. Undoubtedly selected for their vast experience in this field DONG Energy now find themselves in unfamiliar territory. Namely that they are the junior partner and not leading the operation. DONG Energy spokesman Karsten Anker told Offshore WIND that they are eager “to learn about the French offshore wind energy market, as one of many emerging new sectors.” Even though they are extremely satisfied with being part of the 3 zone licence award, DONG Energy sees the offshore wind energy sector as having limited capacity for them and have “not yet decided their final strategy in the market.” Another one of the great winners in this competition was Alstom, the huge French industrial conglomerate. Probably better known for their nuclear energy activities – 30% of all nuclear power plants world wide run with Alstom turbine generator sets -Alstom are now also suddenly big in offshore wind energy.

Offshore WIND spoke to Frédéric Hendrick, Vice President Offshore at Alstom Wind after the announcement of the licences at the EWEA event in Copenhagen and again during a visit to their test site in France.

With 240 Alstom Haliade turbines required for the 3 sites awarded to Eolien Maritime France, Alstom are able to invest heavily in the fabrication plants for blades, nacelles, generators and towers. They have selected two areas for their factories. St Nazaire has been chosen for the production of the nacelles and generators to be in production by 2014. The generators are being made in cooperation with Converteam, which recently became part of the giant GE. Production of towers and blades is planned to start in Cherbourg before 2016. The blades are being made in co-operation with Danish LM Wind Power Group.

Both cities can provide large numbers of qualified and experienced engineers and technicians needed for the work and the supply chain of subcontractors is also well established at all levels. Alstom have been offered subsidies from the regional authorities and given other incentives such as improvements in the existing infrastructure, but Mr. Hendrick explained, “transparency is very important in all their operations.” The factories in Cherbourg and St Nazaire will be the first built by Alstom that will be entirely for the offshore wind energy sector. Together they will create 5,000 permanent qualified jobs. A thousand people will be directly employed by Alstom, 800 of which will be involved with the manufacturing in the factories and 200 created in R&D. These facilities will be a launching platform for worldwide export possibilities, with the UK 3rd round seen as a prime target.

Their 6MW Haliade 150, currently the largest offshore wind turbine in the world, is already undergoing tests after installation in March 2012 on a test site onshore, but very close to the coast, at Carnet in the Loire-Atlantique. Frédéric Hendrick was pleased to be able to tell Offshore WIND that the tests are running to plan. Certification of the test turbine is being done by DNV. After the blade rotation system has been tested at 1/12 of the rated power, the testing builds up with increasing steps of output to the final full 6MW certification after the 12 month program. Their objective is to guarantee a minimum operating time in test of 280 hours without stopping. The duration of the testing stages cannot be guaranteed however as this relies on favourable wind conditions being present at each stage. A second test turbine is to be placed in the sea off the Belgian coast later this year. Pre series production is currently on line to start in 2013 with full series production due one year later.

As elsewhere in the offshore wind energy sector, Frederic Hendrick told Offshore WIND that “after the design phase it is very important to reduce the cost of production, which in turn will reduce the cost of offshore wind electricity.” He continued, “We have designed a robust, simple and efficient turbine in the Haliade. By using larger turbines the efficiency of the offshore wind farm is increased in all phases of the operation.” His list of cost saving factors is as impressive as the turbine itself. With their larger rotor diameter of 150m and a 100m hub height, the 6MW turbine can yield 15% more than comparable turbines on the market.

For the same output per field there are fewer foundations required meaning less subsea survey, less steel, less interfield cable, less O&M… the list goes on. The WTG represents 3 5% of total capex, therefore in this situation more (MW’s) definitely does mean less (capex). He is extremely proud that they have been selected for these 3 licences and that the Alstom input had been an important factor in the awards. 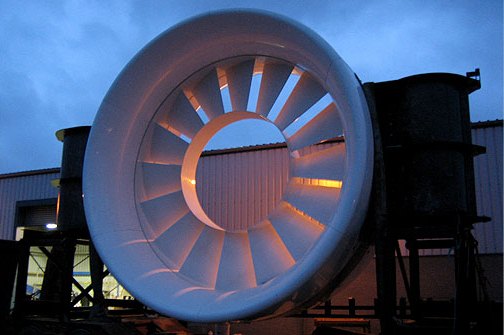