Net financial items were USD (2.2) million (2010: USD (3.9) million) and includes a re-valuation gain (loss) of non-USD currency items of USD 3.9 million (2010: USD (3.5) million) due to the weaker USD. Non-USD currency items are held to match short-and long-term liabilities, including off-bal¬ance sheet liabilities, in similar currencies. The result from associated companies was USD 0.2 million and includes, among others, net results of USD 1.9 million from the 50% owned “JOIDES Resolution” and USD (0.1) million for the 41%-owned well-stimulation vessel “Big Orange XVIII”. In addition, an impairment of goodwill in the amount of USD 1.7 million was recorded which related to the equity investment in the limited partnership KS Ocean Com¬mander. KS Ocean Commander owned the vessel “Ocean Commander” which was sold in 2010.

The Company had nine AHTS vessels in operation at the end of first quarter (20010: three), of which two are owned by the pool partner. During first quarter, four AHTS vessels have operated on long-term contracts for Petrobras in Brazil, one AHTS vessel has operated for Statoil in the Barents Sea and the remaining four AHTS vessels have operated on short-term contracts in the North Sea spot market. The AHTS fleet earned operating revenue of USD 22 million and had 90% utilisation (2010: USD 1.9 million and 79%). The operating margin for the AHTS fleet was USD 7.2 million (2010: USD (2.3) million). The AHTS fleet recorded 22 days technical off-hire (2010: 0 days). The Company had a fleet of ten Brazilian

Vessels Under Construction in Norway The eighth and last AHTS vessel “Siem Amethyst” was delivered in April 2011. This delivery completes the series of ten similar AHTS vessels delivered from a Norwegian yard including the two vessels owned by our AHTS pool partner, for operation in the Siem AHTS pool.

Vessels Under Construction in Brazil One fast crew vessel was delivered during first quarter. One additional fast crew vessel and two fast supply vessels are scheduled for delivery in second and third quarter of 2011. Each of these vessels shall commence 8 year firm + 8 year option contracts for Petrobras.

The two large-size PSVs are scheduled for delivery in 2012 and 2013 and do not have contracts at this time.

Net cash flow from operations during the first quarter was USD 3.4 million and the cash position at 31 March was USD 65.8 million.

The Company has secured debtfinancing for all vessels under construction in Brazil.

The QHSE performance in the first quarter was good and is a result of continuous commitment to and focus on QHSE on board the vessels. The safety records for the first quarter 2011 report one work-related lost time injury and no major discharges to the environment.

The Company has identified the installation of submarine cables and associated services to be a growing market, both with respect to infield and landfall cables in the offshore oil and gas industry, and with respect to inter-array as well as export cables in the offshore renewable energy market. The company acquired all shares in Five Oceans Services GmbH (“FOS”) in April 2011, and invested approximately USD 8 million as consideration for shares and injection of working capital. The amount includes the issue of 200,000 shares by Siem Offshore to the past shareholders of FOS. The transac-tion combines the marine operating capaci-ties of Siem Offshore with the engineering capabilities and project execution expertise of FOS and forms a strong entity to meet the forecasted market growth and customer requirements.

FOS was formed in 2003 and has served the worldwide offshore oil and gas industry as well as the conventional en¬ergy market, with a specific geographical focus on the Middle East, the Eastern Mediterranean Sea and India. FOS has successfully completed more than 20 installation and repair projects of subma¬rine cables. FOS employs approximately 50 people, including a project engineer¬ing and installation team. The manage¬ment team of FOS has more than 20 years experience in the submarine cable installation market.

The main initial asset for the installation of submarine cables will be the vessel “Siem Carrier”, which was converted into a state-of-the-art DP2 cable installa¬tion vessel in 2007.

• FOS will be consolidated into Siem Off-shore’s accounts on 1 April 2011.

• FOS is not expected to contribute to the operating margin of the Company in 2011, but should improve going forward.

Siem WIS has successfully completed the qualification of the PCD system to applicable tests in the API 16RCD standard, as requested by Shell. Several oil companies and other third parties have witnessed the test. Extended tests to qualify for high pressure and high temperature wells (HPHT wells) are now being performed and are expected to be completed in second quarter. Siem WIS is discussing commercial contracts with several oil and service companies re-garding the use of the PCD technology. 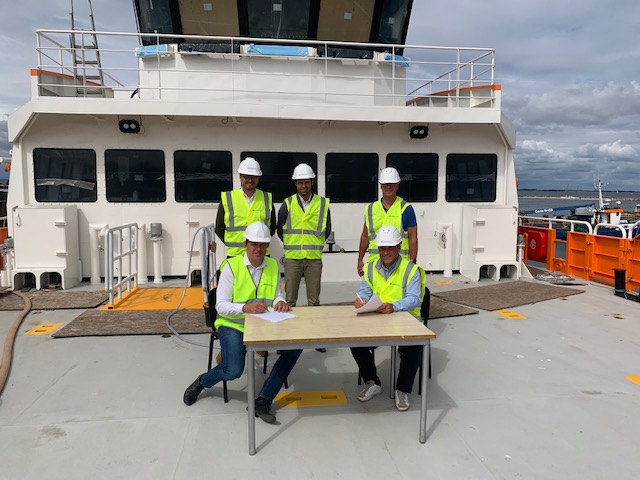