After civil engineering company Roadbridge was placed into receivership last week, the developer of the Seagreen offshore wind farm and its Tier 1 supplier for onshore cable works, SSE Renewables and Nexans, are now working to identify if and how this would affect the project and on potential mitigation measures.

The Ireland-based civil works contractor announced on 11 March that it had requested Bank of Ireland to appoint receivers to the company “as a result of insurmountable financial challenges”.

According to construction industry media, work that Roadbridge was carrying out on the High Speed Two (HS2) railway project as well as some other projects have stopped.

On the Seagreen offshore wind project, Roadbridge was an onshore civil engineering subcontractor to the project’s Tier 1 supplier Nexans, which was contracted by the developer Seagreen Wind Energy, owned by SSE Renewables and TotalEnergies.

OffshoreWIND.biz reached out to SSE Renewables and Nexans following the news about Roadbridge to find out about potential effect this might have on the construction of Scotland’s new offshore wind farm.

“We are working with Nexans to fully understand the implications to Roadbridge’s suppliers and any risks to the delivery of their scope on Seagreen and how these can be appropriately mitigated”, a spokesperson for Seagreen Wind Energy Limited said.

“Nexans has been notified of the unfortunate circumstance which has befallen Roadbridge. We are continuing our operational work on the Seagreen offshore wind farm project according to plan and [are] currently working on solutions to continue the works in a safe and efficient manner”, a spokesperson from Nexans said.

“Nexans has a good relationship with our customer, Seagreen Wind Energy Limited (SWEL), and works in close cooperation with them to find the best solutions”.

According to information on Roadbridge’s website, its scope of work for the Seagreen offshore wind farm encompasses the supply and installation of the onshore power export and optical fibre cables, including Horizontal Directional Drilling (HDD) and cable duct installation works, and the connection between two substations.

The onshore cable route runs between landfall at the coast of Carnoustie and the wind farm’s new substation at Tealing airfield from where it then connects into the existing adjacent SSEN Tealing substation.

Work on pulling the onshore cables through 19.5 kilometres of underground ducts started in August 2021.

Offshore, the installation of the first of three export cables for the Seagreen offshore wind farm, performed by Nexans, started at the beginning of this year.

The 1,075 MW Seagreen Phase 1 is located 27 kilometres off the coast of Angus in the North Sea.

Once up and running, the project will be Scotland’s largest and the world’s deepest offshore wind farm.

The 114-turbine wind farm is expected to produce first power this Spring and to be fully commissioned next year. 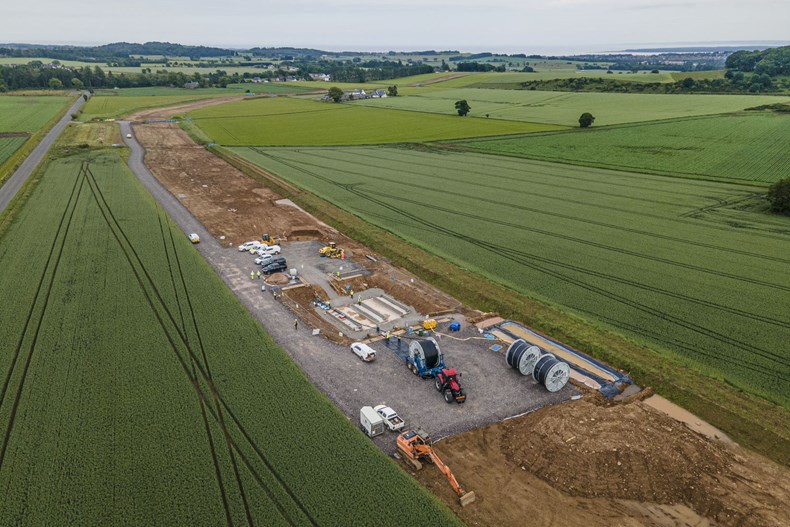