Parkwind has acquired full ownership of KNK Wind, the project company behind the 247MW Arcadis Ost 1 offshore wind farm in the Baltic Sea that won the concession rights at the latest offshore wind tender in Germany.

The former shareholders had teamed up with Parkwind before the offshore wind auction to prepare the bid to build the project, located approximately 19 km northeast of the island Rügen. “We thank Parkwind for the great and straightforward cooperation in the last months to prepare a competitive bid for the German auction,” said Heinrich Bettelhäuser, CEO of WV Energie, previous majority shareholder of KNK Wind.

For the Belgium-based offshore wind developer Parkwind, this is the first project in Germany and, according to the company, the latest move reaffirms its international growth ambitions, following the acquisition of the Irish 330MW Oriel wind farm in 2017.

Eric Antoons and François Van Leeuw, co-CEO’s of Parkwind, stated: “We are delighted to take our first steps in the German offshore market, a pioneering country with a strong investment climate. We are looking forward combining our expertise with the experience of all relevant stakeholders in this market in making this project a success. After the acquisition of Oriel in 2017, this is our second step of many to come in growing Parkwind internationally.”

So far, Parkwind has three operational offshore wind farms in the Belgian North Sea (Belwind, Northwind and Nobelwind) and is progressing towards a financial close this year for its Northwester 2 project, scheduled to be operational as of 2020.

“Together with Northwester 2, Parkwind has now established a development pipeline of 800 MW and aiming for more. We are constantly on the lookout for challenging projects and for the right partners to make them happen. Strong partnerships, in combination with our value proposition, have proven to be a successful formula in this increasingly competitive sector,” Parkwind’s co-CEO’s stated. 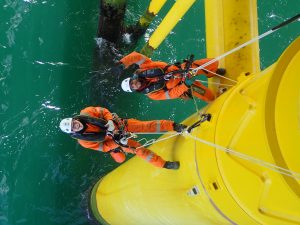