DONG Energy has taken a Final Investment Decision for its Hornsea Project Two, following the UK government’s allocation of the Contracts for Difference (CfD) and the offshore wind giant winning a CfD for what will become the world’s biggest wind farm.

With a capacity of 1,386MW, Hornsea Project Two will become the world’s biggest wind farm, surpassing the 1,200MW Hornsea Project One which DONG Energy is currently constructing.

At GBP 57,50/MWh, the strike price for the Hornsea Project Two (CfD) is 50% lower than the previous round of CfD allocations just two years ago. The Department for Business, Energy & Industrial Strategy (BEIS) launched the second CfD auction in April 2017. At the time, the strike price cap for offshore wind projects coming online in 2021/22 was GBP 105/MWh, and for those that will start generating energy in 2022/23 the strike price was capped at GBP 100/MWh.

DONG’s project is expected to be operational in 2022.

The developer said the cost-drivers enabling the bid for Hornsea Project Two include scale, risk reduction, synergies, as well as maturing industry and technology.

Furthermore, the developer added it already has several years of experience from developing Hornsea Project One in the North Sea. This reduces construction and operation risk of Hornsea Project Two.

In addition, operations and maintenance on both Hornsea projects will be conducted from DONG Energy’s new hub in Grimsby, which also serves other DONG Energy offshore wind farms on the UK east coast.

Samuel Leupold, Executive Vice President and CEO of Wind Power at DONG Energy, said: “We have always promoted size as a key driver for cost. The ideal size of an offshore wind farm is 800-1,500MW, and therefore it is natural that Hornsea Project Two will deliver record-low costs to society. At the same time, the low strike price demonstrates the cost saving potential of developer-built offshore grid connections, which in the UK is included in the project scope.”

“We remain fully committed to financial discipline, and Hornsea Project Two will be value creating to our investors.” 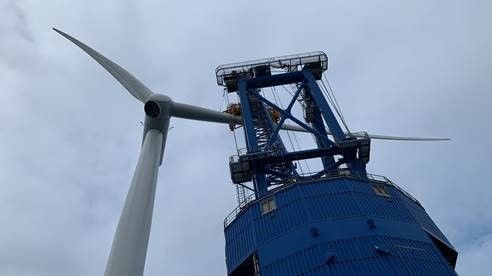