Palfinger Marine has won the order for 97 PF 8000 cranes, which has been developed especially for the wind farms Gode Wind 1 and 2. The wind farms are located 45 km off the German coast.

Start of construction will be the first half of 2015 at Gode Wind 2, followed by Gode Wind 1. The wind farms are expected to be fully commissioned in the second half of 2016. With a total of 97 turbines Gode Wind wind farms will provide green energy to approximately 600,000 German households (582 MW).

The PF 8000 for Gode Wind is the new generation of the successful stiff boom crane in use at Anholt wind farm. DONG Energy demanded an electric crane (electric winch) with a fixed boom and manual slewing. Special attention was given to simplicity, corrosion protection and a fully enclosed design.

The PF 8000 with an outreach of 2,9 m will be the basis of the Palfinger Fixed Boom (PF) crane range. The PF 8000 is a service crane and will be mainly used for lifting spare parts and tools from support vessels to the transition platform.

“For us the Gode Wind contract is an important vote of confidence from the market. It shows the significant potential for our fixed boom crane range”, says Martin Zauner, Head of Palfinger Wind. 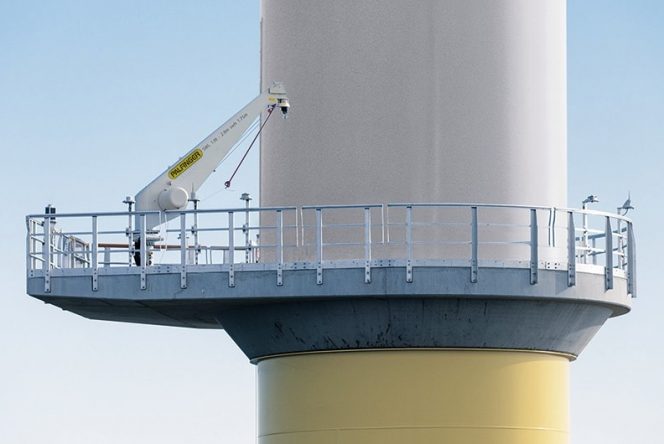