The Institute for Energy Research (IER), based in Washington, D.C., recently published an article on offshore wind energy’s financial viability in New Jersey, appraised through Fishermen’s Atlantic City Windfarm (FACW) project, which had been rejected by the New Jersey Board of Public Utilities (BPU) for being too expensive.

A proposed offshore wind development is generating a lot of discussion in New Jersey. Developers and environmentalists hope to cash in on hundreds of millions in government subsidies while businesses and ratepayers fear offshore wind will result in electricity rate hikes.  So far, the 25 megawatt (MW) Fishermen’s Atlantic City Windfarm (FACW) project, three miles off the New Jersey coast, has been denied approval by the New Jersey Board of Public Utilities (BPU) for being too expensive and risky for residents, though FACW continues to work towards an acceptable resolution. A closer look at the proposal shows just how unsustainable wind projects are without the crutch of public subsidies and government mandates.

In August of 2010, Governor Chris Christie signed the Offshore Wind Economic Development Act (OWEDA) which directed the BPU to establish an offshore wind renewable energy credit (OREC) program in an effort to develop 1,100 MW of offshore wind capacity for the state by 2020.

OWEDA authorizes the state to provide up to $100 million in tax credits for qualified projects in addition to other established federal and state subsidies. By setting up a renewable energy credit program for offshore wind, developers are able to offset the costs of development and production by passing costs on to electricity customers. The offshore wind credits are sold to represent 1 MWh of offshore wind generation. As part of New Jersey’s Renewable Portfolio Standards program, energy providers will be required to certify that a yet-to-be-determined percentage of their power sold in New Jersey comes from offshore sources once offshore wind projects in the state become operational..[i]  The added costs assumed from purchasing offshore wind credits would then be passed onto ratepayers.[ii] 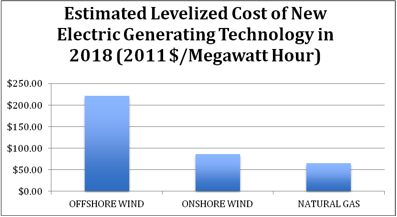 **Since the availability of wind or solar is dependent on forces outside of the operator’s control, their levelized costs are not directly comparable to those for other technologies although the average annual capacity factor may be similar. Because intermittent technologies do not provide the same contribution to system reliability as technologies that are operator controlled and dispatched, they may require additional system investment as back-up power that are not included in the levelized costs shown below. 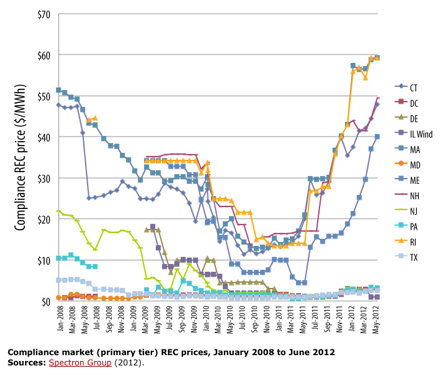 FACW is being proposed as a 25 MW pilot project to test the viability of a large -scale wind project off the coast of New Jersey. The end goal is to develop a 330 MW wind farm further out to sea in federal waters if all goes as planned. Initial estimates for the pilot project place the cost to the state taxpayers at $200 million dollars. For the five-windmill project, that is $40 million per turbine and $8000 per kilowatt. This means costs are actually predicted to be nearly 25 percent above EIA estimates for the average offshore wind project.[v]

In late 2012, the Department of Energy awarded FACW an Advanced Technology Demonstration Grant from the Division of Energy Efficiency and Renewable Energy (EERE) and allotted them $4 million dollars for engineering, evaluation and planning costs.[vi]  Initial planning costs would run much higher than this and so FACW attempted to limit exposure by requiring taxpayers to cover additional planning costs incurred if FACW was not awarded further federal funding. The original denial by the BPU was issued earlier this year as the board was wary of these provisions that would have taxpayers on the hook for the additional $19.2 million dollars should the developer fail to be awarded additional federal subsidies.[vii]

In an attempt to salvage the project, Fishermen’s went back to the drawing board and submitted another proposal, this time having reached an agreement with the initially critical New Jersey Division of Rate Counsel who acts as a consumer advocate in regards to energy prices.[viii]

Recognizing that the public was not excited about the prospect of footing a $19 million dollar bill to a developer should they fail in securing additional federal taxpayer funding, FACW had to sweeten the deal for New Jersey residents. This attempt at restitution is so deceptive as to be laughable. According to FACW, to save New Jersey residents money they’ve decided to lower the price of an offshore wind credit to ONLY $187 dollars. This is about 40 percent less than originally proposed (about $262). FACW claims this will save taxpayers $136 million over the life of the agreement.[ix]

The logic of these arguments needs to be exposed.  Taxing electricity customers 40 percent less than originally proposed in order to get the taxpayers to pony up an additional $19.2 million is a bad deal any way you slice it. In fact, you could argue it would be better at that point if the project DID fail. If the project fails before construction, FACW does not receive their Phase II government grant of $47 million taxpayer dollars and residents are only out the $19.2 million,

The truth of the matter is that FACW is facing a time crunch. While they are counting on $100 million in tax credits from the state, they cannot receive this funding if they do not show $10 million in investment by the end of the year. FACW is keenly aware that this deadline draws ever closer. FACW is also apparently anticipating being awarded an additional $100 million in federal subsidies and tax breaks and pointed to this fact for justification of passing the proposal.[x]

Perhaps most controversial in this whole deal is seeing just who stands to gain from approval of this project. FACW is being financed primarily by XEMC, a Chinese wind turbine manufacturer. While XEMC has agreed in writing to build an assembly plant in New Jersey, that production is wholly dependent on the Chinese developer being awarded state and federal subsidies.[xi]

XEMC is a business entity owned by the Government of China. As such, they are not subject to the same accounting principles of U.S. companies and they don’t have to file with the Securities and Exchange Commission. This has raised some eyebrows.[xii]

FACW claims to have resolved these issues in its latest proposal saying that XEMC has agreed to being subject to the jurisdiction of both federal and New Jersey courts.[xiii] While the integrity of this prospect is still suspect, the bigger point is that FACW is asking for subsidies from the American taxpayer to help a foreign-owned company. This is one more reason the government should get out of the business of providing subsidies.

The arguments against offshore wind are plentiful. High costs, reduction of coastal real estate values, negative impacts on fish and bird populations and the technical complexities of the projects are all major obstacles. The FACW project in New Jersey demonstrates once again just how irrational these projects are in the real world. Sadly, they also show just how resilient the market for taxpayer funded, liability free, subsidized development can be. There is no doubt that FACW will continue pressing for a New Jersey funded payday for its Chinese financiers.

What is clear is this proposal sounds 100 percent unworthy of American consideration and is instead wholly compatible with the business ideals of communist China. Robbing New Jersey rate-payers to fund these wind farms will undoubtedly raise energy prices in New Jersey and cost taxpayers hundreds of millions for the next 20 years. So far the Board of Public Utilities has seen through the unsustainable promises and misguided optimism of these proposals, but this threat of renewable cronyism is on display nationwide, continues to expand, and must be exposed when possible.