At EUR 522 million, new orders remained steady at the previous year’s good level. Consequently, the Nordex Group is outperforming the wind power industry as a whole, which sustained a decline of roughly 30 percent in new business. The strong order intake resulted in a 50 percent increase in the firmly financed order book, which rose to EUR 873 million (30 June 2011: EUR 581 million). Including conditional orders of EUR 1.4 billion, the order book amounted to a total of EUR 2.3 billion as of the reporting date.

In the first half of the year, a loss of EUR 13.1 million was sustained at the EBIT level (previous year: EBIT of EUR 1.6 million), chiefly as a result of pressure on turbine prices and lower capacity utilisation. However, the loss was reduced to EUR 4.2 million in the second quarter (Q1/2012: EUR 9.0 million) due to increased business volume in the course of the year and an improvement of 2.4 percentage points in the gross margin. In addition, the decline of 14 percent in structural costs to EUR 94.7 million (2011: EUR 109.8 million) resulting from the reduction in other operating expenses had a favourable effect. Earnings differed according to segment. In Europe, operating earnings rose at a double-digit rate. The consolidated loss after interest and taxes amounted to EUR 23.3 million (2011: loss of EUR 4.1 million).

As planned, the work on a large number of projects for short-term completion temporarily tied up liquidity, which therefore declined to EUR 175.1 million as of the reporting date (31 December 2011: EUR 212.0 million). Working capital improved by 7.5 percent to EUR 236.3 million (31 December 2011: EUR 255.4 million). The net cash outflow from operating activities improved substantially to EUR 4 million (previous year: outflow of EUR 122.4 million).

Nordex continues to expect that full-year sales will grow to EUR 1.0 – 1.1 billion in 2012 (2011: EUR 921 million). This figure is chiefly covered by the firm orders in hand. However, the upper edge of this range will only be achieved in the event of an acceleration in the pace at which projects are executed. In the first half of the year, a few customers had postponed individual projects. The Management Board expects further new orders of between EUR 480 and 580 million in the second half of the year, thus confirming the previous guidance of full-year order intake of up to EUR 1.1 billion in 2012. The rising capacity utilisation cause the operating margin to increase to 1 – 3 percent. 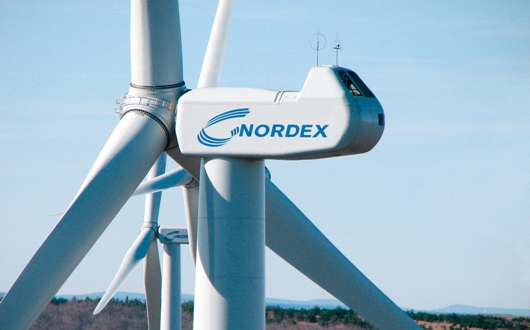