Otto Wulf ‒ A family running their own show

The offshore wind industry is very much dictated by large conglomerates. How is it for smaller companies to keep on their feet in this competitive environment when the stakes are not particular in their favour? Offshore WIND visited family-run towage and salvage company Otto Wulf GmbH and heard how the fourth generation Wulf is running this midsized company in a large industry.

Otto Wulf GmbH & Co. KG has offices in Cuxhaven and Rostock and have an equal share in Wulf Seetransporte GmbH & Co. KG with Reederei Frank Dahl. Their are currently 50 personnel working in the company and another 30 that are shared with Frank Dahl.

Offshore WIND visited the Cuxhaven office where it all started, and where the Wulf family are still based. The office is nicely located in the harbour directly facing the North Sea. Standing in the office you can see from one window the lock in front of which, coincidently one of the Otto Wulf tugs was moored at the time of the visit. From this window you could also see the first foundations of what will become extra storage space for the company. Another window gave an excellent view of the sea front with the busy shipping channel further out to sea. It is here where the fourth generation Wulfs, the two cousins Andreas and Soren are sharing desks opposite each other. While Andreas is keeping up with daily business, Soren Wulf spoke about their company, how it began and how they play their part in the offshore wind industry.

Otto Wulf registered the company, Otto Wulf GmbH, in 1921. For the next 3 generations sons took over from their fathers, until today when the company is run by the fourth generation. From starting work at the company at an early age, Andreas Wulf can now look back at 27 years of service. He worked his way up to become captain and even now he still enjoys sailing on the tugs now and then. Soren Wulf joined the company in 2007 after first having made a maritime career elsewhere.

The company started as a salvage company, recovering lost anchors. The 2nd generation Wulfs added towage activities to the portfolio, assisting fishing and naval vessels through the locks. Soren Wulf: “They sometimes had up to 20 jobs a day back then but today the navy is not in Cuxhaven anymore and while the fishing is not dead it is nowhere near what it used to be. We therefore had to diversify our activities.” From 1975 the company added sea transports with tugs and pontoons to its portfolio.

Nowadays the company offers a wide range of services. Around 15% is taken up by port assistance activities. Other activities include crew transfer, still the occasional salvage projects and in a partnership with Danish company DBB and Dutch company Bonn & Mees provide assistance to floating cranes. The company’s main activity remains sea towage though. The company has a fleet of 6 tugs and 3 barges (TOW I, II and III) and a RoRo vessel operated by Wulf Seetransporte, the Kugelbake, which is used for transporting Airbus components and also occasionally the transport of other heavy components such as those in the wind industry.

Andreas Wulf joined in and spoke more about the company’s role in the offshore sector. Nowadays the company is most known for their involvement with BARD Engineering but as he tells: “Our first project offshore was in 1995 when we transported the large tower sections for KGW which were too heavy to transport by land.” In 1998 they had a turbine transport project for Nordex Energy GmbH which was followed by a few more projects for the same company between 2005 and 2007. In 2006 they transported and erected the met mast at Arkona-Becken Siidost for Ed. Ziiblin AG.

In the same year the company was also involved with the transport of the 2 REpower 5MW test turbines and the tower sections to be installed in Cuxhaven. In 2008 they transported the FINO 3 platform to the location lOOnm northwest of Cuxhaven. In 2007 Otto Wulf had their first assignment for BARD. They had already done some consultancy for BARD but at the end of 2007 were made responsible for the logistics for the 2 BARD VM turbine installation at the Rysumer Nacken in Emden. With the exception of a few projects for companies such as NSW and PROKON (alpha ventus), Ed. Ziiblin AG (Platform FINO 3) again and later on EnBW (EnBW Baltic 1) and Rhenus Project Logistics (Global Tech 1), the company continued to work for the BARD company from 2008 to the present time, through either Otto Wulf or Wulf Seetransporte. They were responsible for logistics of several component transports and also managed the purpose built Heavy Lift Vessel Wind Lift I for BARD.

But, Soren Wulf stresses, “We will never focus solely on the offshore industry. From that point of view we are a bit conservative, we think it is better to diversify and keep businesses balanced.”

The latter is an advantage Soren Wulf says, “We don’t have to consult with shareholders first before we make decisions. Being a family company we are able to build up good and long term relationships with our customers, they know what to expect from us.” Long term relationships is what the cousins look for also when hiring new personnel, and they try to provide a working environment where this is stimulated. This is not always easy as personnel tend to move around, especially in the offshore sector. He adds, “Besides, Cuxhaven is not favourably located, it is small and has no university making it difficult to attract people to work here.”

Crumbs from a big pie

Of course it is not always easy being a family run company. When asking whether it is difficult working closely together being family the question is dismissed immediately. Andres Wulf: “On a personal level it is no problem at all but there are other factors. We are a mid-sized company and it is hard to compete in a market where large companies are trying to build up monopolies and to take over smaller ones. It is difficult to get access to capital from the banks and in the future it will get even more difficult with the changing European rules.”

The big players rule the industry. “They have more lawyers then we have employees!” Andreas Wulf quips, “They pull out a contract but on the last page it states that you need to hand over your company’s last 3 to 5 years balance sheets and, even worse, a credit note of, say, over 20 million euros as a security!” This is of course not a huge problem for large companies but companies with small turnovers cannot sell this to their local banks. “This is not just an Otto Wulf problem,” he stresses. The reality is that developers are not keen on dealing with too many contracts themselves so they choose to split up their activities in a few contracts and find large companies that will take on this responsibility. As Andreas Wulf explains: “big players love big players”. These large sub contractors in return do the same and so on. “In the end they knock on our door again to ask whether we can do the job,” says Andreas Wulf. Being at the bottom of the list though means that the company is only getting the crumbs of the big pie of money.

This economical business model where competition brings the prices down can work but it is no longer a realistic model for the offshore market anymore as this market is interfered by the government who makes rules and restrictions. This has created a situation where for example German tax payers are paying for a project that under the current rules can be contracted to foreign companies who in return take their money back to their own country. This is sometimes frustrating and could not happen in any other country, both claim.

Do the cousins fear for the existence of the company? “We do feel more uncertainty in the industry, people are getting nervous and banks are more reluctant to invest”, tells Soren Wulf. At the moment the offshore wind sector is supplying the company with enough work. The current project for BARD will be completed before the end of the year though. With the current uncertainties surrounding the BARD company they are not sure whether there will be a project following, but if there is then they hope they can continue their good working relation with BARD.

It has though provided them with a good reference for the other projects. Andreas Wulf tells, “We have been involved with the very first purpose built vessel, BARD’s Wind Lift 1 and have gained experience where others are still learning. We have also experience in both the North Sea and the Baltic Sea and know their differences.

There is no way to predict the future but we have a long history and have diversified our business. We do not rely solely on the offshore sector so it would not mean the end if we do not get a new job in the offshore wind industry.”

They do acknowledge that they will need to invest in order to keep up with the developments in the industry but will do so by taking small steps. In the offshore industry for example there is need for tugs that have larger bollard pulls. Soren Wulf; “In the past it was allowed to use tugs with a 20t pull, but nowadays insurance companies insist on tugs of at least 40t.” They have already purchased a tug with a 51t bollard pull, the Wulf 7, and are looking around perhaps to buy another tug of that size. “There are larger tugs available in the market, with between 80-90t, but these are expensive in fuel consumption and not necessarily needed for our activities,” he adds.

The company used to invest in new vessels but nowadays tend to look at second hand vessels, not older than 10 years, as well maintained tugs can last for many more years. “As our company works on spot rates, we do not have a guaranteed flow of income and therefore we need to consider carefully how and for how much we can invest in expanding our fleet.” Soren Wulf explains. It also makes it more difficult to get financing from banks for that same reason. Beside investing in their fleet the company is also looking at expanding their services to the Baltic Sea.

The company has had interest from investors in the past. This could have given them the chance to expand their fleet at a faster pace but the cousins are happy that they have not taken on these offers. Soren Wulf: “We run our own show. No one can dictate to us, so if something goes wrong there are no others to blame!”

In less than 10 years the company will be celebrating its 100th anniversary as a family company. Who would not agree that there are not many companies that have done the same as Otto Wulf GmbH. It remains to be seen whether their children will also feel the same enthusiasm as the 4 generations before had! 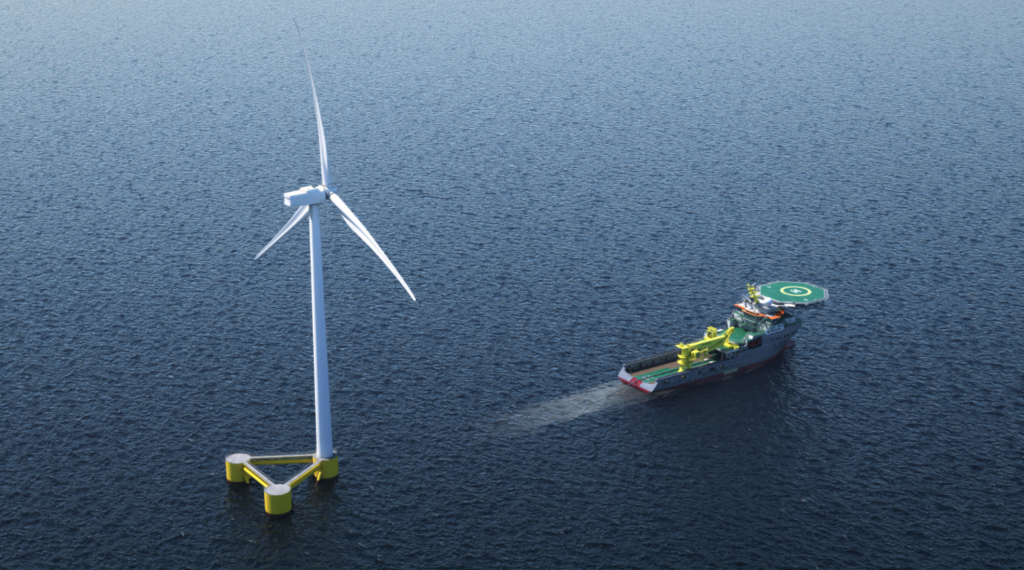