OpenHydro Gets Award for Outstanding Performance in 2011 (France)

Irish tidal energy technology company, OpenHydro, has been honoured at the 2011 Ireland France Business Awards for their outstanding company performance in 2011 and promotion of bilateral trade and investment between Ireland and France.

At an awards ceremony held in Paris, OpenHydro was selected as The Best Irish Company in France owing to its major technological breakthrough in the area of tidal technology, while in the process linking up with two major French companies, EDF and DCNS.

Presented by the Ireland France Chamber of Commerce and NetworkIrlande, the Irish France Business Awards were hosted at the Embassy of Ireland in Paris, France. Ambassador of Ireland to France, H.E. Paul Kavanagh and Ambassador of France to Ireland, H.E. Mme. Emmanuelle d’Achon attended the prestigious annual event.

Gerry Halpenny, president of the Ireland France Chamber of Commerce said: “These awards serve to highlight the important contribution of both Irish and French companies to promoting business and investment between our two countries. Despite a difficult economic climate, this year’s entries show that significant bilateral business opportunities still exist and with the right supports, there is excellent scope for further growth.”

The jury agreed that OpenHydro Technology epitomises the potential for developing energy and environmental prospects between two countries, showing how new ideas backed by capital investment can provide revolutionary solutions to the global energy crisis.

Accepting the award for OpenHydro, James Ives, chief executive, said: “Over the last two years we’ve been very privileged to work with two incredible French companies, EDF and DCNS. Both these companies share our vision for tidal energy and with their support last month, we deployed our first tidal turbine in French waters. This is the first stage in a project which in 2012 is set to be the world’s first large-scale, grid-connected tidal energy farm and France’s first offshore tidal installation. We look forward to building on this partnership by developing other utility scale tidal farms in France in the future with their continued support.”

Earlier this month, OpenHydro won a prestigious industry award by being named Best Company in the ‘Other Renewable Energy’ category by the Global Cleantech Association. 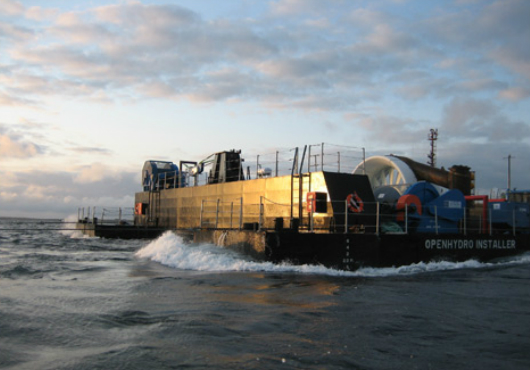